Why didn't China collapse as eagerly hoped as Westerners

Why didn't China collapse as eagerly hoped as Westerners

Over the years, some scholars and politicians in the West have rumored and actively advocated their prediction of China's collapse. In their mouths, China should have collapsed long ago politically and economically. However, China has continued to develop and in many ways has become the world leader.

In fact, it was not these Western scholars and politicians were born shameless, specializing in rumors as career to make a living; but, rather, it was that China's development path is different from their well-known experience in mainstream way of development in the West.

The main reason is that the formulation of state policy is different.

In the democratic countries that Westerners are self-proud of, in which, to elect several groups of people from different parties to discuss the formulation of policies. In many cases, the formulation of the important policy for properly governing the state has become a bargaining chip for different parties to fight for their own interests, in which process, the parties are deadly fighting against each other by the way of dogs biting dogs and pulling the tails of each other. By such a ignorant way, the function of government in policy-making was paralyzed.

In the eyes of the West, China is a typical one party dictator. But, in the process of national policy making, indeed, it has been not a one party dictator at all, but, a consultation of multi-party democracy without hostile battles. In which way, it is easy to reach an agreement based on each other's views toward the goal of building a good nation.

More importantly, in China, the top leaders have been conducting in-depth investigations and studies into the grassroots level, even invites ordinary people from grass-roots to participate in discussing and formulating policies, and thereby, the policies that made in such a way were more realistic and effective.

The experiences of the success of China’s economic reform

The success of China’s economic reform was derived from the well understanding for human inborn nature and the culture of Ancient civilization.

For social governance, there are three main resistances.

First one is that has to deal with people who are capable in independent thinking and tend to act according to own preferred accord, which will negatively affect social governance.

Second one is that social governance would involve in some social reform with the redistribution of social interest, and it would encounter the fierce resistance of interest group, and even ordinary people would also resist the reform due to the fear for potential risks in uncertain social changes.

Third one is the impact of social ideologies which is that people accustomed outdated ideology in dominating thinking and behaving. In The end of laissez-faire 1926, Keynes indicates that: “These many elements have contributed to the current intellectual bias, the mental make-up, the orthodoxy of the day. The compelling force of many of the original reasons has disappeared but, as usual, the vitality of the conclusions outlasts them.”

The process of China’s economic reform was the process of making efforts to reduce and overcome such social resistance. In Canada, it will be the same when making social advancement.

The success of China’s economic reform was also benefited from the culture of long civilization.

Oct. 2, 2014, in article Why did China not produce harmful native religions, I indicate that: “People appreciate the 5,000 years continuous civilization of China, however, most of people have overlooked the nature of the civilization, the valuable point, is not in the length of time, but, in the continuously documented historical facts – the facts in success and failure, which made valuable references, so that the future generations can avoid to repeat mistakes with lesser Detour.”

“The accumulation of experiences is wisdom.”

“The wisdom from 2400 years ago China lessons us that, the ordinary people can happily share in enjoying fruit, but they never willingly share the effort in growing the fruit. A rational government has to enforce them to do something that will benefit to them, but, do not expect to convince them in advance.”

Here needs to specially point out that, in 2400 years ago China, the philosophical text Tao Te Ching said that “the governance of a big country is as that of cooking a piece of small sea food”, it meant that a matter easily broken, and must be very careful.

These ancient teachings were paid attention by the successive governments of China. It was the fundamental of social stability and economic prosperity in more than 2000 years. It was the main reason that China’s economy leading the world before British launching the Opium Wars to interrupt the normal development of China. Now, China is quickly regaining leading position in economy.

Maybe due to the different in civilization background, the process of policy making is totally different between China and the West:

In China, it was by trial to get experience and the proof that is feasible with less social unrest at first, then to be legislated accordingly.

In West, it was to design and legislate at first with less concern the social unrest-causing, and then to be executed accordingly.

The process of the reform in social governance is a process of governing innovation. Obviously, the way of China will be fewer mistakes and easily to be practiced.

1…The former top leader Mr. Deng Xiaoping, as a general experienced in decades long wars, who played a role as a political bulldozer to push away social resistance: “Don’t argue; try it. If it works, let it spread.” He timely provided support for those pioneers in economic reform by his unique political prestige.

China's reform involved in many aspects, it was not mainly from the top-level design in advance, a lot of initiative ideas were envisaged from the grassroots, from the people who understood the situation in grassroots level, and recognized and supported by central government.

2…Government authorized limited area as test zone for economic reform with the right for  independent policy making, which largely reduced social resistance, and the free practice of all available economic means promoted it quickly developed, and then with the achievement to convince public to have easily updated the policies nationally.

It was in Jan. 31, 1979, firstly set 2.14 square kilometers as test-zone in a part of Shekou district of Shenzhen city. After convincing achievements, July 15, 1979, the city of Shenzhen, Zhuhai, Shantou and Xiamen was set as pilot of special Economic Zone. In May 4, 1984 it was promoted to other 14 coastal port cities, and in following several years, it was promoted to many other areas.

Viewing back in today, China’s economic reform was from point to line, and then from the line to area, in step by step gradually with constantly updating policies.

China's economic reform was the process that carefully avoided social resistances; otherwise, even if in one party dictatorship also cannot do anything.

By such patiently cautious approach, China has avoided social unrest as those of many other former socialist countries have suffered, even blooding, due to they changed social system without proper preparation in advance under the way of design and legislates at first.

The main resistance for China's economic reform was more from ideological arguments that insisted on socialist road and any budding in private economy will be severely criticized or even jailed.

This absurd phenomenon was not limited in China.

Such ideological conflict was not limited in socialist countries, too.

In the United States, a typical capitalist country, Mr. Joseph R. McCarthy who once launched McCarthyism to perform political persecution against communism.

In human world, in most of time, it was that irrational suppresses rational – the ignorance in playing leading role.

The ideological confusion was also playing its role in international trade with the argument in identifying whether a country is in market economy.

Because of some share of state-owned economy, over the years, the West questioned the status of China's market economy, however, they overlooked the fact that the big share of state-owned economy in France today, and Britain once experienced a process that was nationalized from private economy and then was privatized again. But, there was no one questioned their nature in market economy - capitalism.

Faced with such irrational arguments, Mr. Deng said that: no matter is black or white; the one that can catch mice is a good cat. No matter which roads, if it cannot develop economy and improve people life is all dead roads.

Mr. Deng Xiaoping has learnt the harm of useless ideological argument, by supporting all available preferable means in regardless which –ist or –ism, to push forward economic development and improve people’s live by flexible way in reducing social resistance.

At the beginning of China’s economic reform, there were a lot of voice in suspicion and opposition, and now is basically no more, most people have recognized that the economic reform was correct.

No people who are in rational mind would hate a prosperous life.

Now, many countries have relaxed visa policy for attracting wealthy guests from China. Among them, Canada was the earlier one.

We may imagine that, if 1.3 billion population’s China is misgoverned to fall into chaos as that of in Syria, what would be the result for this world?

The peaceful development of any country is the great contribution to the whole world.

Viewing back in today, China has been successfully going on the way that Deng Xiaoping envisaged in 3 decades ago.

Now, we have made clear that the success of China’s economic reform was mainly derived from flexible governing approaches, rather than fully from one party dictatorship.

In China, the policy making has been in friendly discussing and in freely adopting a variety of useful suggestions.

For example, Feb. 02, 2018, the article Deliveryman invited to present suggestions to China's top leadership reports that Li is a deliveryman in central China’s Shanxi province. Last July, he submitted his suggestion through “Share your thoughts with China’s Premier Li” on the official website of the State Council, saying he hopes the government will promote cooperation between the insurance sector and the express delivery industry.

Li Pengxuan never expected that his suggestion could result in him being invited by Chinese Premier Li Keqiang for a talk in Zhongnanhai, the exclusive compound for top leadership.

At the symposium on Jan. 31, Li Pengxuan presented his advice regarding the draft government work report to the Premier with other representatives from all walks of life.

Canada: Opposition: Trudeau 'elbowed' female lawmaker, by CNN in one year ago: Opposition leaders in Canada are accusing Prime Minister Justin Trudeau of getting physical during a parliamentary session. T

The meeting was intended to put forward Euthanasia Act that proposed by the ruling Liberal Party, but, it was led into the prime minister's attack on the chest of a woman councilor. 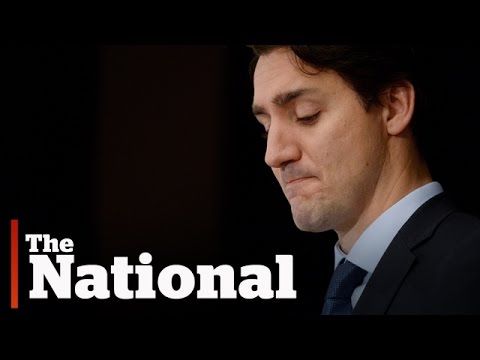 Please look at above photo, how helpless of PM Justin Trudeau is?