Dr. Deming has a philosophical saying: quality does not have to be surprising.

The foundation of Dr. Deming's advice:

All business processes are vulnerable to a loss of quality through statistical variation. Management was responsible for 85% of that variation. Reduce the variation; increase the quality, was

The most surprising thing is that Dr. Deming did not do this first in his native America, but in Japan.

After the second world war, in 1947, Deming was involved in early planning for the 1951 Japanese Census. The Allied powers were occupying Japan, and he was asked by the United States Department of the Army to assist with the census.

He stayed on to advise Japanese businessmen how to inject quality into their manufacturing industry. At the time Japan was notorious in the western world for the shabby goods that it produced. By the late 1970s the roles had been reversed: Japan was producing the quality stuff while America's car industry was in crisis.

It gave Americans some solace at the time to discover that behind the Japanese quality miracle had been two Americans that few of them had heard of: Joseph Moses Juran and W. Edwards Deming. Juran, an electrical engineer, had also gone to Japan after the second world war and begun to teach middle managers about quality. Juran focused more on the human-relations aspects of quality, while Deming's approach involved demonstrating that all business processes are vulnerable to a loss of quality through statistical variation. Management, he argued, was responsible for 85% of that variation. Reduce the variation; increase the quality, was the foundation of his advice. 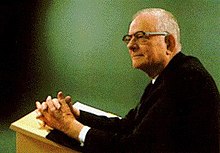 William Edwards Deming (1900-1993) is widely acknowledged as the leading management thinker in the field of quality. He was a statistician and business consultant whose methods helped hasten Japan’s recovery after the Second World War and beyond. He derived the first philosophy and method that allowed individuals and organisations to plan and continually improve themselves, their relationships, processes, products and services. His philosophy is one of cooperation and continual improvement; it avoids blame and redefines mistakes as opportunities for improvement.

Born in Iowa in 1900, Deming’s modest upbringing in an early settler community was to instil habits of thriftiness and a dislike of waste which was to influence his later thinking. His University career started at the University of Wyoming where he achieved an engineering degree in 1921, followed by a Masters in mathematics and physics from the University of Colorado. He completed his studies at Yale University in 1928, where he was awarded a doctorate in mathematical physics. Deming then concentrated on lecturing and writing in mathematics, physics and statistics for the next 10 years.

In the late 1920s Deming became familiar with the work of Walter Shewhart, who was experimenting with the application of statistical techniques to manufacturing processes. Deming became interested in applying Shewhart's techniques to non-manufacturing processes, particularly clerical, administrative and management activities. After joining the US Census Bureau in 1939 he applied statistical process control to their techniques, which contributed to a six-fold improvement in productivity. Around this time, Deming started to run courses for engineers and designers on his - and Shewhart's - evolving methods of statistical process control. At Stanford, Deming taught the Stanford statistic training program to nearly 2,000 people in a couple of years, using the Shewhart Cycle for Learning and Improvement and the PDCA Cycle.

Deming's expertise as a statistician was instrumental in his posting to Japan after the Second World War as an adviser to the Japanese Census. At this time, the USA was the leading economic power, with products much envied by the rest of the world; it saw no need for Deming's new ideas. The Japanese, on the other hand, recognised that their own goods were shoddy by international comparison. Moreover, after the war, they could not afford the wastage of raw materials that post-production inspection processes brought about and were consequently looking for techniques to help them address these problems. Whilst in Japan, Deming became involved with the Union of Japanese Scientists and Engineers (JUSE) and his career of lecturing to the Japanese on statistical methods and company-wide quality: a combination of techniques now known as Total Quality Management (TQM) had begun.

It was only in the late 1970s that the USA became aware of his achievements in Japan. The 1980s saw a spate of publications explaining his work and influence. In his American seminars during 1980, Deming talked of the need for the total transformation of the Western style of management. In 1986 he published Out of the crisis which documented the thinking and practice that had led to the transformation of Japanese manufacturing industry. Just before he died in 1993 he founded the W. Edwards Deming Institute.

Deming's work and writing constitute not so much a technique, as a philosophy of management, Total Quality Management, that focuses on quality and continuous improvement but which has had - justifiably - a much wider influence.

Here we will consider Deming's interest in variation and his approach to systematic problem solving which led on to his development of the 14 points which have gained widespread recognition and which are central to the quality movement and his philosophy of transformational management. Deming’s seven deadly diseases of management and his use and promotion of the PDCA cycle, known to many as the Deming Wheel, are described below:

The key to Deming's ideas on quality lies in his recognition of the importance of variation. In Out of the crisis he states:

'The central problem in management and in leadership...is failure to understand the information in variation'.

Deming was preoccupied with why things do not behave as predicted. All systems (be they the equipment, the process or the people) have variation, but he argued that it is essential for managers to be able to distinguish between special and common causes of variation. He developed a theory of variation - that special causes of variation are usually easily attributable to quickly recognisable factors such as changes of procedure, change of shift or operator etc, but that common causes will remain when special causes have been eliminated (normally due to design, process or system). These common causes are often recognised by workers, but only managers have the authority to change them to avoid repeated occurrence of the problem. Deming estimated that management was responsible for more than 85% of the causes of variation. This formed his central message to the Japanese.

Deming created 14 points which provide a framework to developing knowledge in the workplace and can be used to guide long term business plans and aims. The points constitute not so much an action plan as a philosophical code for management. They have been extensively interpreted by as many commentators on quality, as on other management disciplines.

Here, Deming describes the main barriers faced by management to improving effectiveness and continual improvement. He was referring here to US industry and their management practices.

Deming said that effective management and a commitment to quality were needed to combat these seven deadly diseases. He emphasised the importance of communicating quality messages to all staff and building a belief in total quality management.

The relevance of these principles to a wider general management application has contributed to Deming's status as a founder of the Quality Management movement, not just quality and process control. This is why he interests an audience that is much wider than the quality lobby.

Walter Shewhart originated the concept of the PDCA cycle and introduced it to Deming. Deming promoted the idea widely in the 1950s and it became known as the Deming Wheel or the Deming cycle.

The PDCA (Plan-Do-Check-Act) cycle consists of four steps or stages which must be gone through to get from `problem-faced' to `problem solved.’ Repetition of these steps forms a cycle of continual improvement:

Plan for changes to bring about improvement.
Do changes on a small scale first to trial them.
Check to see if changes are working and to investigate selected processes.
Act to get the greatest benefit from change.

Naturally enough, no one as universally acclaimed as Deming will escape without criticism. Some have criticised his approach as being good for improvement, but uninspiring for creativity and innovation. Others say his approach is not effective for generating new products or penetrating new markets.

Others, particularly Joseph Juran, another quality guru, comment on an over-reliance on statistical methods. Deming's US lectures in the 1980s, however, point time and time again to a mistaken preoccupation with the wrong type of statistics. He argued against figures focusing purely on productivity and control and argued for more evidence of quality, a message which Tom Peters adopted in the 1980s and 1990s.

Deming has stirred up wide interest with his denial of Management by Objectives and performance appraisals. Similarly, his attitude towards integrating the workforce has led TQM to be perceived as a caring philosophy. Paradoxically, his focus on cost-reduction has been pointed to as a cause of downsizing.

Although in the 1980s the US paid tribute to Deming - not only for what he did in Japan, but also for his thinking and approach to quality management - few American companies used his methods. One reason for this is perhaps that by the 1980s Deming was selling a system that worked, that he implied that he had discovered the only way to achieve quality, and that he was no longer alert to changes in the problems. In Japan, in the beginning, he had listened to Japanese needs and requirements, showed them respect and developed his thinking with them. With the USA in the early 1980s, he appeared to try to dispense his philosophy rather than adapt it to a different culture.

In 1951, in early recognition of their debt to Deming, the JUSE awarded the Deming prize to Japanese organisations excelling in company-wide quality. It was not until the late 1980s that the US recognised Deming's achievements in Japan and elevated him rapidly to guru status. The 1990s showed Deming's legacy is likely to have both a lasting and significant impact on management theory. Why is this?

The first reason must lie in the nature of his achievement. Deming has been universally acclaimed as one of the Founding Fathers of Total Quality Management, if not the Founding Father. The revolution in Japanese manufacturing management that led to the economic miracle of the 1970s and 1980s has been attributed largely to Deming.

Secondly, if the 14 points make less of an impact today than they did just after the Second World War in Japan, it is probably because many aspects of those points have now been adopted, assimilated and integrated into management practice in the 1990s as well as continuously debated and taught in Business Schools around the world.

The third reason is more complex, and lies in the scope of his legacy. Deming's 14 points add up to a code of management philosophy which spans the two major schools of management thought which have dominated since the early 20th century: scientific (hard) management on the one hand, and human relations (soft) management on the other. Deming succeeds - despite criticisms of overuse of statistical techniques - in marrying them together. Over half of his 14 points focus on people as opposed to systems. Many management thinkers veer towards one school or the other. Deming, like Drucker, melds them together.

The originality and freshness of Deming is that he took his philosophy, not from the world of management, but from the world of mathematics, and wedded it with a human relations approach which did not come from management theory but from observation, and from seeing what people needed from their working environment in order to contribute of their best.

Out of the crisis: quality, productivity and competitive position.Cambridge, Cambridge University Press, 1986