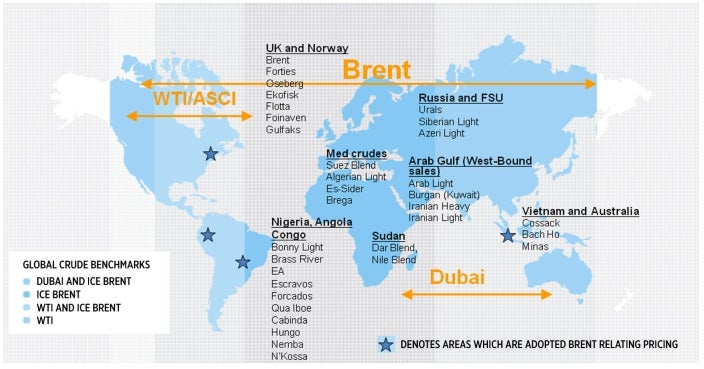 
【参见】
Brent vs. WTI
The Reemergence of the WTI/Brent Spread 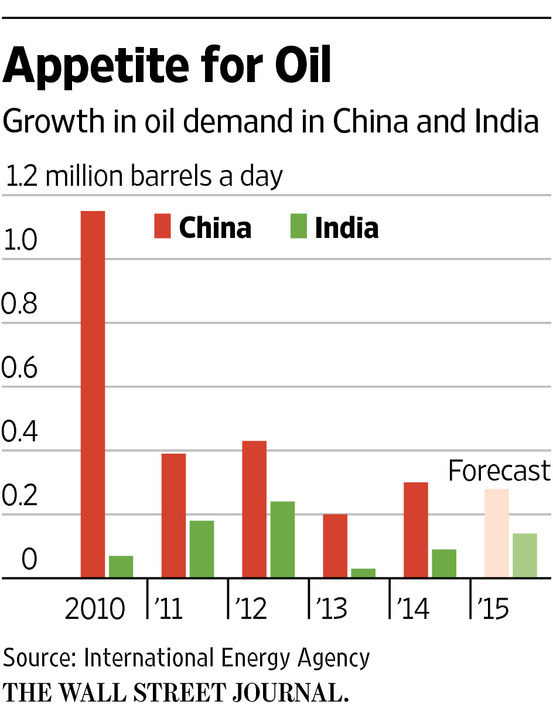 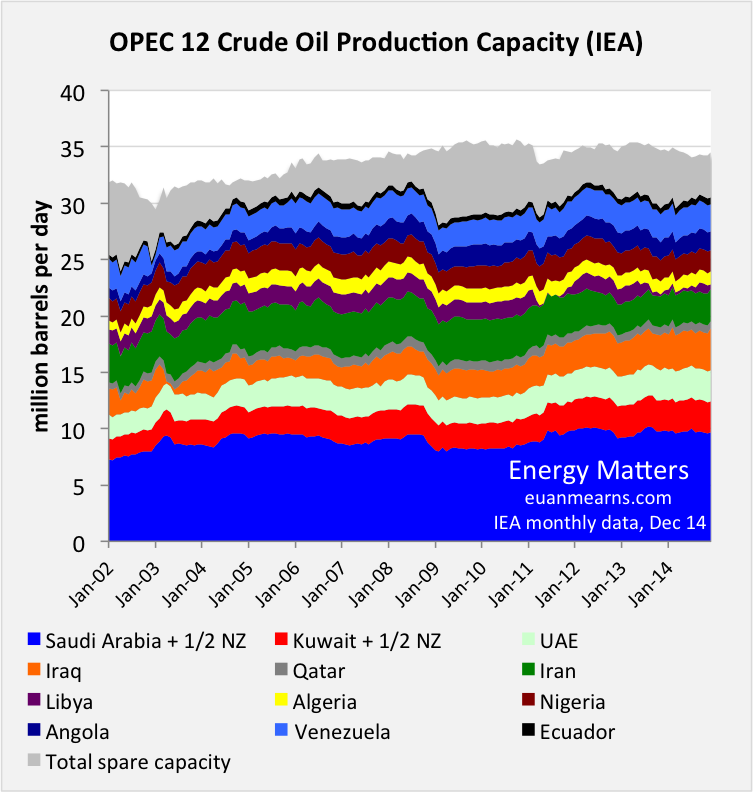 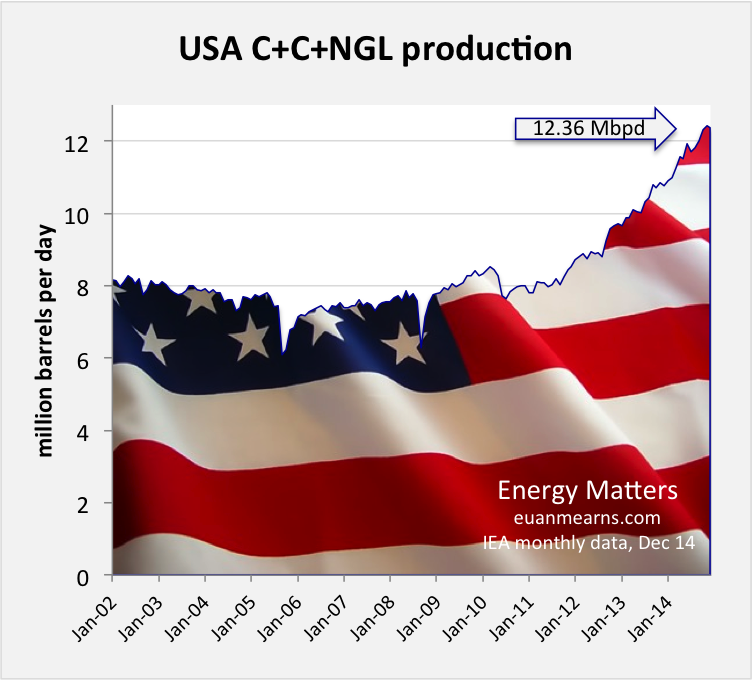 Plunging oil prices have sent shockwaves around the world, threatening to topple governments and bankrupt businesses even while U.S. consumers celebrate cheap gasoline.

Yet while rising supply has been largely blamed for the precipitous price fall, China’s lower demand growth and its long-term implications for the global economy have been largely ignored. Is Beijing a winner or loser from cheap oil?

On January 7, U.S. benchmark oil prices dipped below $48 a barrel, the lowest since April 2009 and half the level of just five months ago. The slump follows November’s decision by the Organization of Petroleum Exporting Countries (OPEC) not to curb production, despite surging U.S. shale supply and weakening Asian and European demand.

China’s role in oil’s rise and fall reflects its re-emergence on the world stage. During the past decade, the communist giant’s industrialization spurt saw it become the world’s second-biggest economy and top consumer of resources such as iron ore and coal, as well as the world’s largest net oil importer.

According to Societe Generale [5], a French multinational banking and financial services company, Beijing’s opening to world trade at the start of the 21st century, signified by its joining of the World Trade Organization in 2001, was responsible for increasing the oil price from around $20 a barrel to $100. During this period, China’s demand grew by the equivalent of Japan and the United Kingdom’s total oil consumption, giving oil markets a similar shot in the arm to that of other commodities.

As a result, China became the world’s largest oil importer in 2013, surpassing the United States, and currently imports nearly 60 percent of its supply.

However, China’s oil demand growth is falling, with Beijing now struggling to prop up a faltering economy. ANZ Research predicts China’s economy will expand by only 6.8 percent in 2015, down from an estimated 7.4 percent last year and the slowest expansion since 1990, amid continued deleveraging and overcapacity in a number of industries.

While now expanding from a much larger base, the nation’s “New Normal Economy”of slower growth is not conducive to another surge in oil demand and prices, argues MarketWatch columnist Craig Stephen.

“The oil market is unlikely to find another country, or even a continent, that can take over this degree of heavy lifting in demand growth. Meanwhile, longer-term forecasts that China can maintain anything close to its recent pace of growth increasingly look misplaced,” he argues.

Chinese government researchers estimate [8] that there was nearly $6.8 trillion worth of “ineffective investment” in China between 2009 and 2013, which has resulted in massive overcapacity in many Chinese industries. Even some consumer markets appear to be slowing sharply, causing inventories to skyrocket. Most notably, with regards to China’s oil demand, in November, Chinese passenger-vehicle sales posted [9] only a 5 percent gain, a major slowdown compared to previous double-digit rises in the world’s biggest automobile market.

“In the past, demand appeared inelastic as growth continued even as crude prices reached triple-digits. But this period coincided with state-funded industry being the dominant driver, whereas demand for gasoline for cars can be expected to be dependent on the income growth of the middle class,” Stephen says.

(Recommended: Russia's Military is Back [10])

The IEA’s December oil market report [11] notes a “sharp slowdown in Chinese oil demand growth” along with Europe and Japan as contributing to the weak outlook. It estimates total Chinese demand growth of just 2.5 percent in 2014 and 2015, with gains in transport fuels and petrochemical feedstocks only slightly outweighing weakening demand for gasoline, diesel and fuel oil.

Despite recent falls in oil prices, Beijing’s move in late November to hike consumption taxes for oil products has resulted in “little discernible price change to Chinese consumers,” negating an expected economic benefit that would have come from lower prices, the IEA said.

Yet lower oil prices are still seen as a net benefit for the Chinese economy. Bank of America Merrill Lynch estimates China’s GDP [12] increases by about 0.15 percent for every 10 percent drop in the oil price, with its current account balance growing by 0.2 percent of GDP and consumer inflation declining by 0.25 percentage point.

International Monetary Fund researchers have estimated [13] that falling oil prices could boost China’s GDP by 0.4 to 0.7 percent this year and by 0.5 to 0.9 percent in 2016.

In 2013, China imported around [14] 280 million metric tons of crude oil at a total cost of nearly $220 billion, but recent lower prices could shave more than $30 billion off the bill, Lin Boqiang, director of China Center for Energy Economics Research at Xiamen University, told China’s state media [15].

China’s consumers, manufacturers and transportation companies are major winners from cheaper oil, while the losers include its own energy companies and workers, including its nascent shale gas sector [16].

Chinese producer prices have fallen by 10 percent over the past three years and annual inflation is at only 1.5 percent, indicating the extent of the deflationary threat.

Even at $60 a barrel, global inflation is set to plunge to levels not seen since the global financial crisis, from 1.5 percent to 1 percent, although it would still lift global economic growth by 0.5 percentage point, according to JP Morgan Securities. [17]

For a global economy already struggling to cope with deflationary downturns in Europe and Japan, China’s slowdown would add to the focus on the United States as the key driver of global growth, along with Asia’s emerging economies.

“Any massive redistribution of income can raise political tensions,” Berenberg Bank economist Holger Schmieding said in a recent [17] research report. “But, net/net, strengthening the U.S., Europe, Japan, China and India, while weakening Russia, Iran, Saudi Arabia and Venezuela, is likely to make the world a safer place in the end.”

However, analysts do not see low oil prices lasting forever, with a rebound to $100 predicted by securities firms [18] Morgans and UBS.

While China is expected to dominate energy demand growth until the mid-2020s, an aging population and declining economic growth could see India become the leading engine of energy demand by 2040, the IEA predicts [19].

The IEA also notes that [20], similar to Washington’s predicament before the shale boom, rising crude oil imports by China and India from the Middle East and other regions “increase their vulnerability to the implications of a possible shortfall in investment or a disruption to oil supply.”

For now though, both Beijing and Washington have much to gain from oil’s sudden slide.