2015.01.04
Falling Oil Spells Boon for Most of Asia’s Economies
No Country Is More Dependent on Crude Imports Than China

Tumbling oil prices could prove to be a boon for the many Asian economies that depend on crude imports.

With oil at its lowest price in more than five years, governments in countries such as India and Indonesia can spend money on much-needed infrastructure and other growth projects without stoking inflation. Falling crude prices also give China’s flagging economy a boost, allowing its central bank—and others in the region—to ease rates even as a recovering U.S. looks to do the reverse, economists say.

Combined with loose monetary policy and a gradual recovery in global demand for goods and services, falling oil prices should help lift emerging Asia’s gross-domestic-product growth this year to 4.7% from an estimated 4.3% in 2014, according to Capital Economics, a consulting firm.

“The decline in oil prices really took people by surprise,” said Cedric Chehab, head of research at Business Monitor International, a unit of Fitch Ratings. Sliding oil prices, he said, are “undoubtedly good for consumers, but the effect across Asia is going to be asymmetrical.”

Oil accounts for as much as 18% of total imports in Asia, excluding Japan, or about 3.4% of its total GDP, according to Bank of America Merrill Lynch. And oil makes up 18% of Japan’s imports, or 3.3% of its GDP, according to Capital Economics. 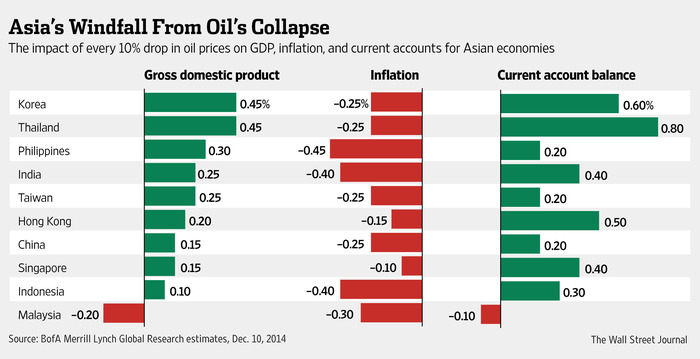 The decline in oil prices should boost GDP growth in the Asia-Pacific region by 0.25% to 0.5%, said Rajiv Biswas, Asia-Pacific chief economist at consulting firm IHS. That comes as slowing growth in China and Japan should be weighing on the region’s economies.

Of Asia’s economies, none is more dependent on oil imports than China. The country spent $234.4 billion to import oil in 2013. That was just below the U.S., which was the world’s top buyer of crude until it was surpassed by China in 2014, according to estimates from the U.S. Energy Information Administration.

Analysts say that if oil prices were 20% lower this year on average than the roughly $100-a-barrel average in 2014, Chinese state coffers could see a $50 billion boost. “A 30% fall in oil prices will boost Chinese GDP by about 1% next year,” said Julian Evans-Pritchard, China economist at Capital Economics.

Brent crude has already fallen below $57 a barrel, down by half from its $115-a-barrel level in June, a drop accelerated by the U.S. shale boom and Saudi Arabia’s refusal to cut output. The price of oil could average as low as $53 a barrel in 2015, according to Morgan Stanley, which would be a nearly 50% drop from the average 2014 levels.

Toby Iles, a senior analyst at the Economist Intelligence Unit in Singapore, said the consultancy has raised its 2015 GDP growth forecast for China to 7.1% “on the back of the decline in oil prices.” Some analysts say lower prices give China room to maneuver and maintain a GDP-growth target of at least 7% this year, down from a targeted 7.5% in 2014. 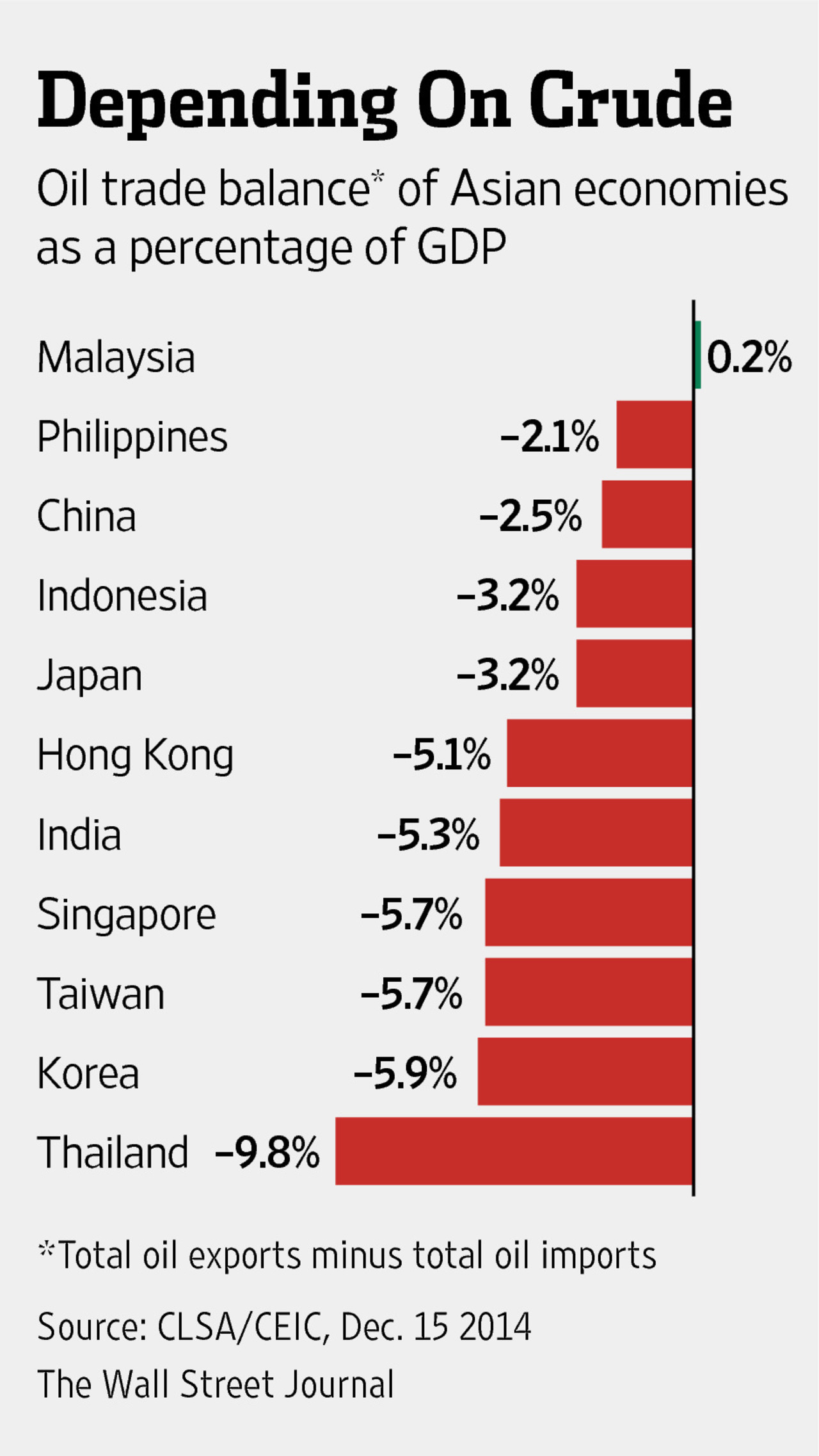 Depressed oil prices could help China make up for some lost ground in its economy due to slowing industrial growth, falling exports, rising bad-debt levels and struggles in shifting to a consumption-led, rather than investment-led, growth model. If oil prices remain low, China could follow up its November interest-rate cut with another one this year, analysts say.

While China stands to benefit, the real winners in the current oil plunge are India and Indonesia, both facing high current-account deficits, Mr. Chehab said. Both countries will be able to reduce relatively high interest rates without worrying about the impact on inflation, he said.

India’s Modi administration and Indonesia’s Jokowi government have, since recently taking power, slashed most of the large fuel subsidies that have crippled policy making in the past. For the 12 months leading up to March, two months before Narendra Modi was elected prime minister, India had fuel subsidies of almost $22 billion for consumers, though much of that has gradually been cut, and the country is planning to deregulate fuel prices completely if oil continues its fall.

According to officials at India’s oil ministry, every dollar drop in oil prices helps reduce the government’s burden of subsidy payments by $1 billion. Mr. Chehab said the cost of oil is one factor that will help India’s GDP growth increase to around 6.3% next fiscal year from an estimated 5.6% for the year ended in March.

Indonesia, meanwhile, scrapped gasoline subsidies completely on the last day of 2014, a month after raising subsidized fuel prices by about one-third. It has promised more reforms in fuel pricing, and a range of economic and administrative policies that could help lift GDP growth to 5.5% this year from an estimated 5.1% last year, Mr. Chehab said.

Thailand, the Philippines, South Korea and Taiwan are Asia’s other beneficiaries of falling oil prices. Mark Williams, chief economist at Capital Economics, said the consultancy has raised its GDP-growth forecasts for Taiwan and South Korea by half a percentage point each amid the decline in oil prices.

In Japan, the case for benefiting from cheaper oil is less clear-cut. While dollar-denominated crude has been falling and helping imports, the yen has continued to decline, reducing the benefits. Japan is also struggling with deflation, which low oil prices don’t alleviate. Still, lower energy prices could cut the nation’s trade deficit by almost 2% of GDP in coming months, economists say.

The exceptions to Asia-Pacific’s oil-plunge windfall are the countries in the region that export oil: Malaysia, Mynamar, Brunei and Australia.

Malaysia, Asia’s biggest exporter of oil, could see oil-related revenue fall to 3.1% of GDP in 2015 from last year’s 5.9%, according to Chua Hak Bin, a Singapore-based economist at Bank of America Merrill Lynch.

Low oil prices are set to reduce Australia’s petroleum resource rent tax by 760 million Australian dollars (US$615 million) over the next four years, according to a budget-document update three weeks ago. The Australian government said it doesn’t expect a material rebound in oil prices over the next couple of years.

Disruption is creeping up on Saudi Arabia and the global oil market on which it relies. So far, this has centered on supply: North America’s shale boom has upended expectations of ever-increasing dependence on Middle Eastern crude.

But Saudi Arabia’s oil minister, Ali al-Naimi, is also worried about the other side of the equation. At a conference last month, he asked: “Is there a black swan that we don’t know about which will come by 2050 and we will have no demand?”

Against the backdrop of oil’s recent plunge, Mr. al-Naimi was thinking of potentially disruptive trends including new technology and efforts to cut carbon emissions.

Beneath the headline, though, the story is changing. Compared with 2014’s forecast, the agency cut one million barrels a day on average from estimates for the next five years. That may not sound like much, but consider that excess supply weighing heavily on prices now is estimated to be only around 1.5 million barrels a day.

Perhaps more importantly, the mix of demand is changing, too. 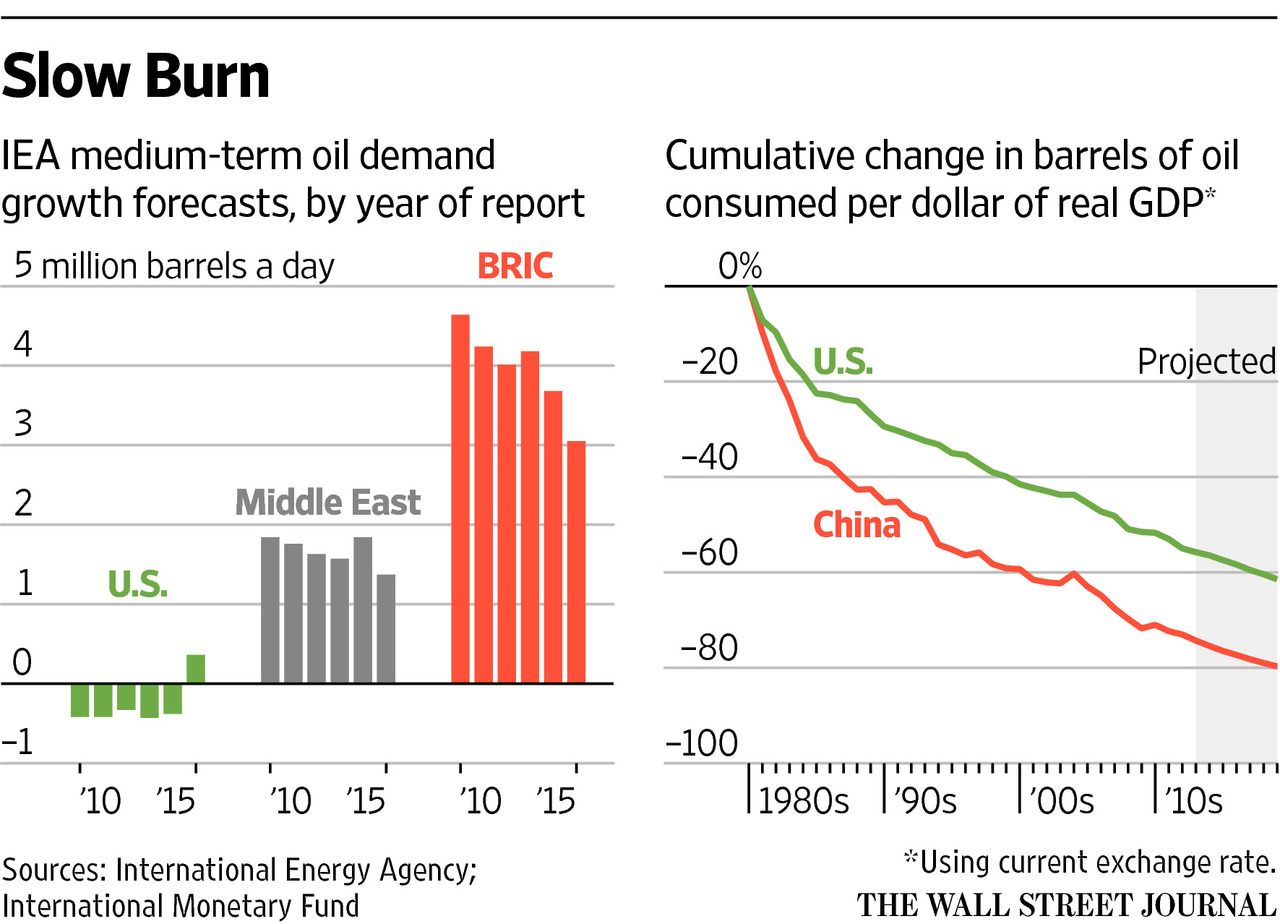 Three years ago, the IEA projected global demand would grow by 3.86 million barrels a day between 2015 and 2017. Of that, 79% came from so-called BRIC countries—Brazil, Russia, India and China—and the Middle East. The latest forecast cut that growth estimate and now only 63% is set to come from those regions.

This makes sense given a recovering U.S. economy and Americans’ predilection for bigger vehicles when gas is cheaper. Meanwhile, a cooling Chinese economy and the impact of lower oil prices on the economies of oil-producing countries eats into growth from emerging markets.

The shift should worry oil producers. The U.S. response to lower gas prices won’t match that of the late 1980s and 1990s. Then, the prime working- and driving-age population was still growing strongly and hybrid and electric vehicles were largely unavailable.

The IEA still expects U.S. demand to peak in 2019. Oil intensity in terms of barrels per dollar of gross domestic product is set to continue falling in the U.S., and at an even faster pace in China. At 1.16%, compound annual growth of global demand in the IEA’s latest medium-term forecast is the weakest since 2009.

Big Oil struggles to conceive of a world where demand growth slows to a trickle or stops. Exxon Mobil sees global demand hitting about 117 million barrels a day in 2040. Yet back in 2007 it saw that level being reached in 2030. And even Exxon can be blindsided. Its strategy in this century’s first decade implicitly assumed relatively cheap oil and the U.S. needing ever-rising imports of oil and natural gas. That turned out to be utterly wrong.

Similarly, prevailing assumptions such as improvements in batteries for electric vehicles advancing very slowly or that everyone in emerging markets will own a gas guzzler (rather than, say, using something like Uber) may prove myopic. New technologies, whether mobile phones, flat-screen televisions, or even shale fracking, are nascent until, suddenly, they aren’t and rapidly replace what came before. Multidecade oil projects requiring high break-even prices?such as Canada’s oil sands—look especially vulnerable if demand patterns change.

Oil’s sheer volatility, along with its geopolitical and environmental baggage, provides powerful incentives to use less of it. Saudi Arabia’s current strategy appears aimed at making rival producers sweat. Equally, it may represent a concerted effort to court consumers faced with a small but rapidly growing set of alternative choices.