While the Orangerie museum was rebuilt around them for six years, Monet's waterlily paintings, too large to move, had to remain in place in the oval rooms built for them in 1927.

PARIS, May 14 — Over the last six years, as the Musée de l'Orangerie underwent a $36 million renovation and expansion, its most valued treasure, the eight tranquil paintings of Monet's large-format waterlily series, remained trapped inside a noisy and muddy building site. 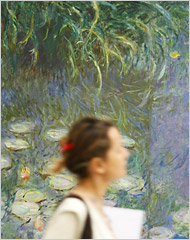 The waterlilies at the Orangerie are some of Monet's most abstract.

There was no alternative. While the museum's Walter-Guillaume collection of Impressionist paintings traveled the world, the waterlilies could not be detached from the walls where they were installed in 1927, one year after Monet's death. Construction — and demolition — had to take place around them.

To protect the paintings from water, heat, dust and vibrations, they were sealed inside reinforced boxes, each attached to an alarm system. Even so, "On one or two occasions, because of vibrations, the waterlilies began screaming, and the workers had to drop tools," noted Olivier Brochet, the project's chief architect,

With the work completed this month, curators were at last able to relax: the "Nymphéas," as the paintings are known here, emerged no worse for the wear. And on Wednesday, a good four years behind schedule, this museum on the western edge of the Tuileries gardens reopens to the public.

At first glance, the Orangerie, standing across from the Musée du Jeu de Paume, its near-identical twin, looks largely unchanged. Yet, not for the first time, it has undergone a radical makeover, notably the addition of underground galleries for the Walter-Guillaume collection.

Built in 1852 to house an orange grove, with a glass facade facing south across the Seine, the Orangerie was used to billet soldiers on leave from the trenches during World War I. After the armistice of Nov. 11, 1918, the French prime minister, Georges Clemenceau, invited his friend Claude Monet to display his large-format nymphéas there.

Monet had been working on them since 1914 in a spacious studio added onto his Normandy home in Giverny. And he would continue painting these vast canvases until his death at 86. The following year, 1927, eight were finally installed in two specially designed oval-shaped rooms in the Orangerie.

"These landscapes of water and reflection have become an obsession for me," he wrote to a friend in 1909. "It is beyond my strength as an old man, and yet I want to render what I feel." In total, he painted some 250 oils of the vegetation in and around the Japanese-style lagoon at Giverny.

They are to be found in major museums around the world, as well as at the Musée d'Orsay and, prominently, at the Musée Marmottan-Monet, both in Paris. Yet the Orangerie series is unique, not least because of its size: each painting is two meters, or six and a half feet, tall. If lined up side by side, the works would measure 91 meters, or 298.5 feet, in width. They are also conceived so that the four in one gallery represent sunrise, and the four in the other evoke dusk.

Most striking, though, is how these paintings, particularly those of dusk, come close to abstraction: it is as if this master of Impressionism had chosen to leap beyond post-Impressionism, Fauvism, Cubism and other new movements and prepare the way for Jackson Pollock and Mark Rothko more than two decades later.

After World War II, Monet was himself somewhat out of vogue. And in the 1960's, when Juliette Walter sold the collection of her first husband, Paul Guillaume, to the French state, no one thought it odd to alter the Orangerie to accommodate those 144 paintings. Twice married and twice widowed, Mrs. Walter also named the collection after her second husband, Jean Walter.

It was at this point that the 328-foot-long rectangular Orangerie was given a second floor, one that blocked the natural lighting intended for the nymphéas. For a while, at least, the newly arrived works by Renoir, Cézanne, Picasso, Matisse, Modigliani, André Derain and Chaim Soutine became the stars of the museum.

Today, however, with Monet one of the art world's biggest draws, the new renovation was aimed at restoring the museum to the way he had imagined it. The second floor was demolished so that once again the nymphéas enjoy natural light, which, with the changing weather, seasons and hours of the day, constantly alters their mood.

Mr. Brochet, the architect, said unexpected problems arose because, despite the Orangerie's elegant neo-Classical exterior, it was in fact constructed shoddily. "It was thrown up quickly, without proper foundations," he said. "I have just been in Shanghai. They would have torn it down and rebuilt it properly. But that would not be possible here."

A fresh complication was posed by the discovery of remnants of a 16th-century city wall in the area assigned to the new Walter-Guillaume galleries. This led to a prolonged bureaucratic squabble over how the wall should be treated: in the end, a 30-foot section has been preserved and is now incorporated into the design.

In these new galleries, natural light floods a wide corridor where oils by Renoir and Cézanne are given pride of place. Other rooms are devoted to more modern masters like Picasso and Matisse. The museum's collection of works by Soutine is arguably the best in Paris.

Still, for all the extra space gained, what perhaps matters most is that the Orangerie is once again a shrine to Monet and his beloved waterlilies: anyone lucky enough to be alone with the nymphéas is invited to meditate, perchance to dream.