For a New Paris Museum, Jean Nouvel Creates His Own Rules

The administration building, above, has walls covered in exotic plants.

PARIS — No one relishes a grand architectural scandal the way Parisians do. François Mitterrand sprinkled the city with bold landmarks, from I. M. Pei's glass pyramid at the Louvre to Dominique Perrault's National Library, which was regarded by many as a noble failure. Georges Pompidou built just one, the colorful machinelike museum that bears his name, and if traditionalists were appalled by it, he is still best remembered for that masterpiece of 1970's populism. 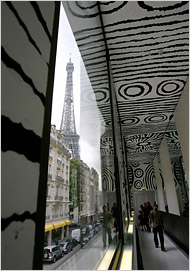 The atelier and bookstore building has aboriginal ceiling painting.

Like its predecessors, the new Musée du Quai Branly should raise the hackles of people who hate to see Paris's beauty tampered with. Defiant, mysterious and wildly eccentric, it is not an easy building to love. Its jumble of mismatched structures, set in a lush, rambling garden on the Left Bank of the Seine in the shadow of the Eiffel Tower, hardly conforms to notions of Parisian elegance. And the relocation of African, Oceanic and Asian artworks from the Musée de l'Homme and the Musée des Arts Africains et Océaniens has stirred considerable resentment.

Yet for all of its flaws, Jean Nouvel's building creates a kaleidoscopic montage of urban impressions. And once you give yourself over to the experience, you may find it the greatest monument to French popular culture since the Pompidou.

Mr. Nouvel is best known for technologically refined architecture that distorts the way we perceive the world around us. His 1994 Cartier Foundation building on Boulevard Raspail is a hypnotic reworking of the conventional glass box, a play of transparent and reflective surfaces that dissolves into the city around it.

At Quai Branly, however, Mr. Nouvel did not want to impose Western technological values on a building devoted to non-Western art. Nor did he want to create a parody of tribal architecture.

"The building could not be an affirmation of the triumph of Western architecture," he said, gazing down on his creation from the top of the Eiffel Tower on a recent afternoon. "If you understand the rules," he said, the mystery is lost.

It's a nutty idea. Without rules, how does an architect begin? Mr. Nouvel got started by observing his context. The museum rises from a 19-acre site anchored at its east end by a row of grand 19th-century apartment buildings. Their uniform facades represent the rationally ordered Paris of Baron Haussmann, who carved out the city's broad boulevards. Haussmann's efforts were seen as a way of cleansing the old city of its medieval squalor. But the aim was also to isolate the other: the downtrodden urban populace, among whom radical ideas festered.

To Mr. Nouvel this is not dead history, as recent rioting by immigrants on Paris's outskirts has shown. Thumbing his nose at Haussmann, he offers an anarchic collection of motley structures that spill out over the garden. The main body of the museum, propped up on thick columns, extends through the center of the lush space. An enormous curved glass wall shields the garden from cars roaring by along the Seine. Two small buildings — one for artists' studios, another for administrative offices — protrude from the ends of the Haussmann apartments.

The studied casualness is dumbfounding at first. The forms seem carelessly patched together. A cylindrical lobby and temporary gallery tucked under the main building seem squashed under the weight; the connection between the gallery buildings and the offices — a few small bridges — looks flimsy.

What's more, each facade is different, as if the architect couldn't stop fussing with his design. On one side of the building are rust-colored louvered brises-soleil. On the other, a row of colorful boxes projects out over the garden.

Some will attack the project as yet another example of a self-indulgent architect run amok. Others will take issue with the handicraft quality of some of the structures and the use of childlike colors, which raise touchy questions about how we portray non-Western cultures.

Yet as you explore the buildings, it is clear that a vibrant imagination is at work. The main gallery building atop the columns, loosely inspired by Le Corbusier's 1952 Unité d'Habitation housing block in Marseille, suggests a ship drifting through the city. Yet the exterior is made intentionally crude by the rust-colored blinds and colored boxes.

The atelier structure seems like a simple Modernist glass box at first glance, yet a subtle pattern, reminiscent of aboriginal artwork, can be discerned on the building's facade. Inside a number of aboriginal artists have painted the ceilings in bold, swirling patterns that are illuminated by night so that they are visible from the street.

By contrast, the exterior of the administration building is swallowed up by a vertical carpet of exotic plants punctured by big windows. On some stories, the plants invade the building, crawling down the interior walls. ("When you put in little flowers, people are happy," Mr. Nouvel said of his design.)

Taken as a whole, the museum evokes an abandoned city, sprinkled with French Modernist landmarks, that has been taken over and transformed into a wondrous collage.

The approach to the galleries rewards patience. From the lobby visitors climb a long, spiraling ramp around one side of a towering glass silo housing hundreds of musical instruments. The ramp then doubles back, crossing the temporary gallery space before reaching a corridor that leads to the main galleries.

The journey is perverse yet also magical. Enclosed behind glass, the instruments are like exotic birds perched just outside of reach. As the ramp rises, and the silo is left behind, you feel as if you are being lifted up into the air.

The final payoff is in the main galleries, a cavernous, 650-foot-long hall. Two parallel leather-clad barriers embedded with benches and video screens weave down the middle. Mezzanine platforms at either end offer sweeping views of the exhibits.

The effect is of an informal warehouse packed with unexpected treasures. Bathed in an inky light, the artworks are in towering glass cabinets whose edges seem to fade into the darkness. At times the transparency allows you to view rows of artworks all at once that virtually float in the vastness of the space.

This project certainly won't satisfy everyone. But should it? Mr. Nouvel did not set out to pay homage to history, be it Modernist, neo-Classical or otherwise. His message is that the old system doesn't work: let's invent a new one.

In that sense the Musée du Quai Branly is part of a historical continuum, linked to the Pompidou and to Charles Garnier's Paris Opera in the way it melds social and visual experiences in a joyful promenade. Mr. Nouvel's design is an act of dissent that forces us to feel the world again.