Crabtree's catalyst is an organoiridium compound with the formula [C8H12IrP(C6H11)3C5H5N]PF6. It is a homogeneous catalyst for hydrogenation and hydrogen-transfer reactions, developed by Robert H. Crabtree. This air stable orange solid is commercially available and known for its directed hydrogenation to give trans stereoselectivity with respective of directing group.

The catalyst is reactive at room temperature. The reaction is robust without drying solvents or meticulous deoxygenation of the hydrogen. The catalyst is tolerant of weakly basic functional groups such as ester, but not alcohols (see below) or amines. The catalyst is sensitive to proton-bearing impurities.

The catalyst becomes irreversibly deactivated after about ten minutes at room temperature, signaled by appearance of yellow color. One deactivation process involves formation of hydride-bridged dimers. As a consequence, Crabtree's Catalyst is usually used in very low catalyst loading.

The hydrogenation of a terpen-4-ol demonstrates the ability of compounds with directing groups (the –OH group) to undergo diastereoselective hydrogenation. With palladium on carbon in ethanol the product distribution is 20:80 favoring the cis isomer (2B in Scheme 1). The polar side (with the hydroxyl group) interacts with the solvent. This is due to slight haptophilicity, an effect in which a functional group binds to the surface of a heterogeneous catalyst and directs the reaction. In cyclohexane as solvent, the distribution changes to 53:47 because haptophilicity is no long present (there is no directing group on cyclohexane). The distribution changes completely in favor of the trans isomer 2A when Crabtree's catalyst is used in dichloromethane. This selectivity is both predictable and practically useful. Carbonyl groups are also known to direct the hydrogenation by the Crabtree catalyst to be highly regioselective. 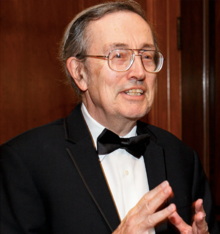 Member of Yale faculty since 1977

Design and synthesis of inorganic, coordination and organometallic molecules with unusual structures and properties. These are typically catalytic and electrocatalytic properties for atom economic (green) transformations, bioinorganic relevance or utility in alternative energy strategies, such as solar energy, nitrogen fixation, ammonia oxidation and hydrogen storage.