Yes, Dogs Can Have Anxiety, Too—Here\'s How You Can Help

The golden retriever is 1/2 of the popular Instagram duo, Watson and Kiko. Kiko's best friend, Watson, is a white golden retriever who is famous for his "trust falls". The cute canines can be seen cuddling (sometimes with their feline friend, Harry) in countless images on the account.

But despite his adorable appearance, Kiko has a sad secret. He suffers from anxiety. Yes, you read that right: Animals can have anxiety issues, too.

"Anxiety in pets is much the same as it is in humans. It's a chemical response in the brain," explains Gary Richter, MS, DVM, and author. "Just as with humans, it is not voluntary and neither your pet nor a human can easily make a conscious decision to 'turn it off'."

Sometimes, pets are genetically predisposed for anxiety, Richter says. " In other cases, anxiety is a learned behavior. Dogs and cats are creatures of habit and pattern. When their normal routine is disrupted it can cause stress and anxiety. For example, if a person works from home every day, their pet gets accustomed to them being there all the time. If the person then gets a new job, which takes them out of the house, this is a disruption in routine and may cause anxiety."

Loud noises like fireworks and thunderstorms may also lead to anxiety, as can inadequate socialization as in youth and experiences of abandonment. That's what happened to Kiko, who was stolen from his owner at the age of one. Three sad years later, she finally gave up hope of his return and got a new dog, Watson. Incredibly, Kiko was found in California shortly after and returned, skinny, flea-ridden, and anxious, to his original owner in Washington.

How to Know if Your Pet is Anxious

"If they begin behaving in ways that are outside their normal pattern, it could be a sign of stress," Richter says. Behaviors such as pacing, vocalization, inappropriate urination/defecation, etc. are all signs of an anxious animal. They may either seek out more attention and get 'clingy' or they may isolate themselves and hide. Some pets may even try to run away. It all depends on the individual."

Kiko is afraid of being alone and used to lick his paws and legs to self-soothe, leading to sores, his owner explained on Instagram. He also barks if they stop too long on walks and sometimes acts aggressive around other dogs. His owner works hard to make sure he feels safe, but the biggest source of comfort has come from his fellow dog, Watson. "Slowly I learned that Watson was helping [Kiko] with his anxieties," she shared. "They quickly became inseparable and best friends."

What To Do if You Suspect Your Pet is Anxious

Seek out the professional help of a veterinarian, trainer, or behaviorist with experience treating anxiety. "Just like in humans however, anxiety is tough to deal with because it is not a 'rational' behavior," Richter says. "It's instinctual and chemical. If you can't talk a person out of a panic attack, you certainly can't talk a dog down from one."

The solution could be as simple as spending more time with your dog, Richter says, but in more serious circumstances, a vet may also prescribe medications. " In my practice, we use natural alternatives (valerian, l-theanine, lavender, CBD) to help with anxiety as well," Richter explains. For Kiko, extra love and attention from his family-especially Watson-seems to have worked wonders.

"Although this Instagram account started just about Watson it has become more than that. It's about two golden retriever brothers who found each other to love and help one another," reads a caption on Kiko and Watson's Instagram. "To inspire people with there [sic] story and to teach others and myself about compassion, love and the true value of friendship. I think I wasn't meant to be Kiko's best friend but Watson for sure was. And even though I love Kiko so much I know that Watson is his true love and if that makes him happy it makes me happy." 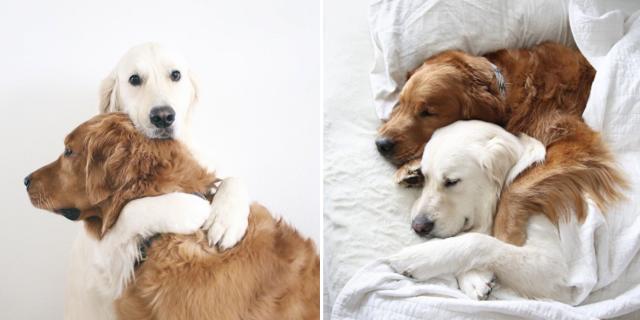