What's your criteria finding REAL friends? I didn't see in it: Can you? She's the one, saying often "F---" "S---" can get away with it - Cut off losers, a way to go for your life. Never soften your heart to cut off someone hurting you.

Jennifer Lawrence on Finding True Friends in Hollywood: 'My Bulls--- Detector Is Phenomenal' 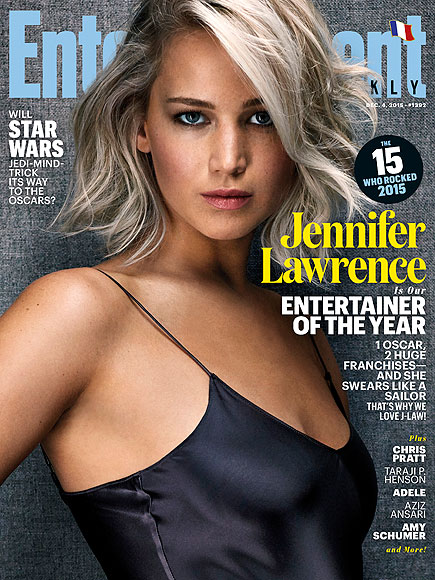 Jennifer Lawrence knows who her true friends are – and isn't afraid to weed out the phonies.

Lawrence, 25, has surrounded herself with one of the most enviable squads in Hollywood. And in the newest issue of Entertainment Weekly, in which Lawrence is named the 2015 Entertainer of the Year, she opens up about why she finds it important to keep a tight group of "real" friends.

The Hunger Games actress explains that as she continues to reach new levels of success, she has learned to protect herself from people who might try to get close to her for the wrong reasons.

"People start to feel a lot less guilty when you become bigger or have more money," she says. "People feel less guilty taking from you because it's like stealing a Snickers from Duane Reade [drugstore]. People forget about the personal drain or attack that you feel."


For this reason, Lawrence has become more selective about who she lets into her life, making sure they are people she can truly count on.

"I have a very small circle," she says. "The moment I feel like someone is using me or is in it for the wrong reasons, I have zero guilt about just cutting them the f--- out of my life."

"My bulls--- detector is phenomenal," she says. "None of my friends bulls--- me. Everything in my life has to be real."

Part of her tight circle includes Lawrence's Hunger Games costars. From pranking each other to taking countless selfies and even having a group text chain, the cast has become especially close over the past five years.

Lawrence credits the late nights on set while filming the franchise for their unbreakable bond.

"There's just crazy s--- you would never tell anybody but you do because you're sitting on a set together for 16 hours a day. Josh [Hutcherson], Liam [Hemsworth], Woody [Harrelson] – we know each other," she said. "These people know more about me than anybody on the planet!"

But what gave the entire world #Squadgoal envy was when Lawrence became best friends with Amy Schumer and her sister, Kim Caramele.

They are currently working on a screenplay together, and Lawrence says the collaboration has been a blast.

"They're brilliant writers, too. We work really well together – it's been the most fun thing ever," she says. "All I do is laugh."

RELATED: What Did Jennifer Lawrence Send Amy Schumer After She Won Her First Emmy?

After dabbling in writing, Lawrence says she's interested to work behind the scenes more, along with taking on a few smaller roles, now that her franchise commitments have ended.

"I'd like to write some stuff that I'm not acting in, too," she says. "I'd also like to direct a comedy. I have wanted to direct as long as I've wanted to act. I just don't talk about it because I'd rather just do it."

For more from her EW feature, read her full interview here.
[ 打印 ]
[ 加入书签 ]