David Clonts welcomed guests to the ceremony and Reverend Bradley Prater, father of the bride, performed the double-ring ceremony. Topiaries and ivy adorned the front porch where the ceremony was held. Family pews were marked by bouquets of Sahara roses and foliage. 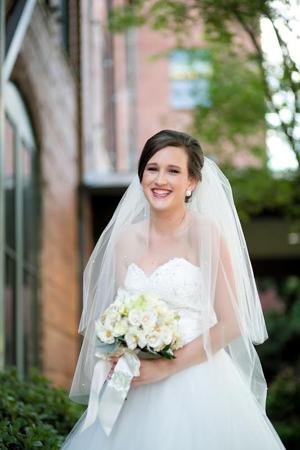 Kati Moss of Dallas, Texas and Amber Kimbrell of Marietta, served as maids of honor. Bridesmaids were Callie Nash, cousin of the bride, Ansley Ezell, Elizabeth Clonts, all of Rome; Katherine Clonts of New York city, New York; Chandler Day of Adel; Elizabeth Prater of Tampa, Florida; Brittany Orton of Powder Springs; Caitlin McKenna of Atlanta; Costa Head of Canton; Chelsea Kinsler of Woodstock and Kendall Butler, sister-in-law of the bride, of Kathleen. They wore formal-length champagne dupoini silk dresses. They carried bouquets of Sahara and porcelina roses with white lisianthus, dusty miller, and seeded eucalyptus accents tied with champagne satin ribbon, which the bride embroidered for each attendant with their monograms.

The flower girl was Hannah Clackum of White. She carried a petite bouquet fashioned from the same flowers as the bridesmaids.

The bride, given in marriage by her parents and escorted by her father, wore a formal gown of lace and tulle. The white lace bodice featured a strapless sweetheart neckline that cinched at the waist with a white satin obi sash. The full tulle skirt finished into a chapel length train. A fingertip length veil dotted with pearls completed the look. The bride carried a hand-tied bouquet of white, blush, and champagne roses with accents of antique green hydrangea, and white Freesia with dusty miller and seeded eucalyptus accents tied with ivory satin.

Kyle Butler of Kathleen, brother of the groom, was the best man. Jacob Prater of Rome, brother of the bride, Caleb Prater, cousin of the bride, of Tampa, Florida, Bin Cochran, Mitch Basnett, Sean Herald and Caleb Lee, all of Kennesaw, J.P. Hogan, Zach Forbes and Caleb Reyes all of Atlanta and Colin Blankin of Marietta were the groomsmen. Ethan and Owen Campbell of Armuchee were the ring bearers. They carried “Here comes the bride” flags down the aisle.

The mother of the bride wore a formal column gown of champagne lace over ivory satin. The mother of the groom wore a floor-length navy gown with navy lace bodice. The mothers were presented with small bouquets of ivory roses and ivory hypericum berries.

Following the ceremony, a reception was held on the lawn of the bride’s parents. Refreshments included the bride’s four tier vanilla pound cake filled with almond buttercream. The smooth vanilla buttercream icing was accented by pearl icing trim along the bottom of each layer. The cake was topped by a gold metallic “Mr. and Mrs.” emblem. The groom was presented with a chocolate chip cookie cake.

The evening before the wedding, the groom’s parents hosted a rehearsal dinner at The Rome Area History Museum.