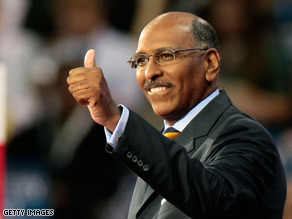 
Michael Steele will be the next Republican National Committee chairman.

1 of 2 Steele, the first African-American to hold the post, defeated South Carolina GOP Chairman Katon Dawson, 91-77, in the final round of voting among the RNC's 168 members.

"This is our opportunity. I cannot do this by myself," he told the crowd at the annual RNC meeting Friday. "God bless you, and God bless our party."

Earlier Friday, Republican National Committee Chairman Mike Duncan, who was elected to lead the committee in 2007, dropped his re-election bid, telling committee members: "Obviously the winds of change are blowing here at the RNC."

Two others also dropped out of the race Friday, leaving Steele and Dawson running against each other. After the sixth round of voting, Steele received 91 votes. Only 86 votes were needed.

Duncan rose to address the 168-member committee after three disappointing rounds of balloting in the chairman's election. He bled votes on every successive ballot, his support trickling to the other candidates in the race.

Despite the sometimes contentious nature of the campaign and criticism that the party suffered with him at the helm, Duncan told the crowd the race had been worth it.

"I thought this would be good for the party," he said. "And I think it has been."

Duncan earned a noisy round of applause when he said running the committee "has truly been the highlight of my life."

Blackwell had been in last place after four rounds of voting.

"My fellow Republicans and members of the RNC, I cannot change the composition of this electorate. Nor would I want to. I do want to influence your perspective and your attitude at this moment in history. We must be a party that makes good the promise of Lincoln. We must unleash a new, a new birth of freedom," Blackwell said.

Michigan GOP chairman Saul Anuzis also ended his bid to head the national party Friday. He did not endorse either of the remaining candidates.

With Republicans out of the White House and in the minority in both houses of Congress for the first time since 1994, the new chairman will have an uncommonly powerful role in revitalizing the beleaguered party.

"What counts now, quite frankly, is competence more than change," said Massachusetts committee member Ron Kaufman, who backed Duncan's re-election bid. "People want a chairman who can run the building, raise the money and spend it wisely, and that becomes more important to folks than just change for change's sake."

Duncan had garnered more public endorsements from RNC members than any of his opponents and had run a sophisticated re-election campaign. However, many in the committee were ready for a clean break from the soft-spoken Kentuckian, who managed to raise $400 million during a difficult 2008 cycle.

Duncan, tapped in 2007 to succeed Ken Mehlman, is also associated with former President George W. Bush and sat atop the party through an election in which Republicans hemorrhaged congressional seats for the second consecutive cycle.

Some party members want the new chairman to change with the times to win back disaffected voters, while others are convinced the party must stress basic conservative principles like small government and lower taxes.

With so many considerations on the table and opinions differing widely among the membership, no candidate emerged early as the true front-runner. As a result, the race had, at times, turned sour. Each contender was the victim of e-mail salvos laden with opposition research that appeared in member inboxes almost daily in recent weeks, sometimes anonymously.

Dawson presided over of a string of GOP successes in South Carolina, from the state house on up to last year's pivotal Republican presidential primary.

He boosted his prospects earlier in January, but a number of party members said they didn't savor the thought of having a white Southerner as the face of the party in the age of Obama. In September, he resigned from a country club with a whites-only restriction in its deed.