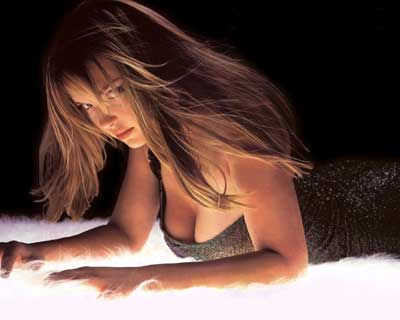 Katherine Heigl was born November 24, 1978, in Washington D.C., to parents Paul and Nancy. Raised in New Canaan, Connecticut, along with her two older brothers and older sister, Katherine's time in the spotlight began when she started modeling. katherine heigl modelsOnce Wilhelmina, a modeling agency, got hold of photos of a then 9-year old Katherine, it didn't take long for her to get modeling jobs. She appeared in magazine ads and a Sears catalogue, and made her television debut with a role in a Cheerios commercial.Modeling paved the way to acting for Katherine, as it did for young actresses such as Rachael Leigh Cook and Mena Suvari. By the age of 12, she could be seen on the silver screen in the 1992 film, That Night, making her feature film debut.katherine heigl in my father the heroAfter a role in Steven Soderbergh's King of the Hill, Katherine appeared as Gerard Depardieu's daughter in the 1994 remake of the French film, My Father, the Hero. Her role as the beautiful teen having to bear with her father's strict rules was not a stretch for the actress; apparently, she was not allowed to date until she was 16.Venturing into the action genre, next up for Katherine was the film, Under Siege 2: Dark Territory, as Steven Seagal's niece.She only pursued a full-time acting career after graduating from New Canaan High School, where she balanced acting and modeling with the hectic life of a student. With appearances in Seventeen magazine and film and television roles under her belt, Katherine moved to the hub of acting to further her career.katherine heigl does independent filmsOnce in LA, she starred in independent films such as Prince Valiant, Stand-Ins (as Rita Hayworth's stand-in) and the Disney feature, Wish Upon a Star. After a role in the 1998 Bride of Chucky, the latest installment of the Chucky slasher series, and the film Bug Buster, Katherine starred opposite Peter Fonda in the made-for-TV film, The Tempest.katherine heigl is an alienKatherine started making herself comfortable on television, becoming a regular on the 1999 short-lived drama Roswell -- a former hit alien series on the WB network. She actually auditioned for the three female lead roles before winning the role of Isabel, the "alien on earth" character she portrays on the show.While working on Roswell, Katherine made time to take on two film projects, with roles in 100 Girls and Valentine.katherine heigl in the ringerIn the spring of 2001, Katherine appeared in NBC's TV movie, Ground Zero, but it was shelved by the network for two years, and eventually broadcast in 2003. Also in 2005, Heigl was cast opposite Johnny Knoxville in The Ringer, a Farrelly brothers comedy. Soon after, she was cast as Isabella Linton in the MTV modern adaptation of Emily Bront's classic novel Wuthering Heights.katherine heigl knows anatomyKatherine biggest break has come in the form of the hit series Grey's Anatomy where she can be seen every week as Dr. Isobel Stevens. With all the good press and accolades the show hass received, we can only assume that Katherine's star is surely on the rise.

In late 2006, Heigl was nominated for a Golden Globe award in the category, Best Supporting Actress in a Series, Mini-series, or Motion Picture Made for Television for her work on Grey’s Anatomy. Also in 2006, she filmed Knocked Up, a comedy from writer-director Judd Apatow, starring opposite Seth Rogen. Upon its June 2007 release, the film received wide critical praise and proved to be a huge box office success as well. Having portrayed three characters named “Isabel” or some variation thereof, Heigl has joked that she must have been named that in a past life. She has been on FHM’s “100 Sexiest Women in the World” list twice as of 2007. As far as her personal life is concerned, Heigl was in a relationship of several years with Jason Behr, her co-star on Roswell, but they split up prior to her stint on Grey’s Anatomy. In June 2006, she became engaged to singer Josh Kelley, whom she met on the set of his music video for “Only You.” In June 2007, Katherine Heigl said that a wedding date has officially been set. Katherine and Josh will get married on December 23, 2007, two days before Christmas.
[ 打印 ]
[ 加入书签 ]