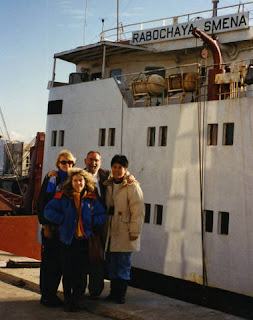 During the ten years I worked for WFP, I helped open two Country Offices: the first in Beijing, China and the second in Pyongyang, North Korea. I had no choice with the first one. But for the second one, I was happy to be back.

I was actually in the swimming pool at the Chinese Embassy in Rome when my boss introduced me to the WFP officer who had just been appointed as the first Country Director to China. I was told that I would be going to help him open the new WFP office in Beijing. I was not happy. I was in Rome with the Chinese Translation Group at FAO and the working conditions and pay were much better than what I would get back in Beijing. But as a junior official of the Foreign Affairs Department of China’s Ministry of Agriculture, I had no choice. I was still very young, had only been working for the government for a few years and was still quite unused to “foreigners” and their strange ways. But in 1981, an order was an order and I packed my bags for Beijing.

The office allocated to WFP in Beijing consisted of two empty rooms in the UNDP office, a few cardboard boxes and an old manual typewriter. In Rome I had an electric one! But soon I was arranging meetings for my boss with various Chinese government ministries, going along as interpreter and translating and typing correspondence on that old manual typewriter. I ordered new office furniture from Hong Kong and coordinated a lot with UNDP, as it was their telex machine and pouch service that we used. I also had to help my boss and his family settle into their new surroundings. I threw myself into the work and was beginning to enjoy my new job even though I only received standard government pay, equivalent to about $10 a month. But I could see how WFP was helping build a stronger China and that meant a lot to me. A few months later, an International Secretary arrived. But instead of reducing my workload it actually increased, as I also had to help her settle in to a new, strange country. Soon after the projects started, my title was changed to Program Officer. I much enjoyed visiting the projects and seeing how WFP was helping the country develop.

In 1995, many years after I had settled in Canada, I received a phone call from WFP Rome asking if I would be willing to help set up a new office in Pyongyang, North Korea. Because of the flood emergency in the DPRK, I was on a plane a few days later and in Pyongyang as part of WFP’s “Gang of Four”, as we were known locally.

Same old scene as China I thought, but in more ways than one. Same bare, empty rooms; although this time we actually had to carry the cardboard boxes up six floors, literally on our backs. But no manual typewriter this time: computers and a satellite phone.

Once out in the countryside, assessing the flood damage, it was for me like a journey back in time. Despite the modern appearance of the capital, Pyongyang, the countryside was much the same as the rural China of my childhood. Despite my Canadian and UN passports, the people looked the same as me. It wasn’t difficult to blend in. And when the first WFP food shipment arrived at the port of Nampo aboard the Russian ship, Rabochaya Smena, I felt that same sense of pride as I did in China ten years earlier to be working for an organization that really helps ordinary, poor people.

Now WFP is 50 years old, almost as old as me. I feel proud to have been part of the organization.

WFP’s “Gang of Four” (l to r Merete Johansson, Margaret Minitti, Trevor Page, Jianying Gong) at the port of Nampo with the first shipment of WFP food to arrive in North Korea on the Rabochaya Smena.