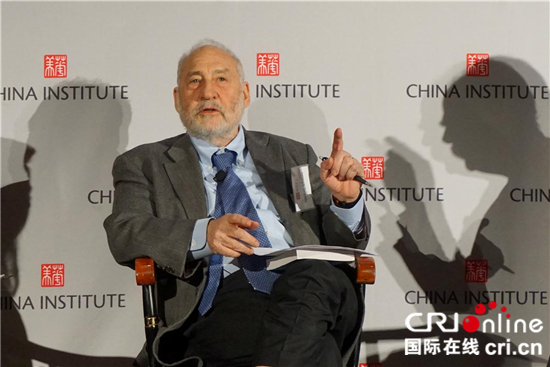 Joseph E. Stiglitz, a Nobel laureate in economics, is University Professor at Columbia University and Chief Economist at the Roosevelt Institute. His most recent book is Globalization and Its Discontents Revisited: Anti-Globalization in the Era of Trump.

US President Donald Trump's recently announced import tariffs on steel, aluminum, and $60 billion in other goods that the US imports from China each year are in keeping with his record of responding to nonexistent problems. Unfortunately, while Trump captures the world's attention, serious real problems go unaddressed.

NEW YORK – The trade skirmish between the United States and China on steel, aluminum, and other goods is a product of US President Donald Trump’s scorn for multilateral trade arrangements and the World Trade Organization, an institution that was created to adjudicate trade disputes.

Before announcing import tariffs on more than 1,300 types of Chinese-made goods worth around $60 billion per year, in early March Trump unveiledsweeping tariffs of 25% on steel and 10% on aluminum, which he justified on the basis of national security. Trump insists that a tariff on a small fraction of imported steel – the price of which is set globally – will suffice to address a genuine strategic threat.

Most experts, however, find that rationale dubious. Trump himself has already undercut his national-security claim by exempting most major exporters of steel to the US. Canada, for example, is exempted on the condition of a successful renegotiation of the North American Free Trade Agreement, effectively threatening the country unless it gives into US demands.

But there are a host of issues in contention, involving, for example, lumber, milk, and cars. Is Trump really suggesting that the US would sacrifice national security for a better agreement on these minor irritants in US-Canadian trade? Or perhaps the national-security claim is fundamentally bogus, as Trump’s secretary of defense has suggested, and Trump, as muddled as he is on most issues, realizes this.2

As is often the case, Trump seems to be fixated on a bygone problem. Recall that, by the time Trump began talking about his border wall, immigration from Mexico had already dwindled to near zero. And by the time he started complaining about China depressing its currency’s exchange rate, the Chinese government was in fact propping up the renminbi.

Likewise, Trump is introducing his steel tariffs after the price of steel has already increased by about 130% from its trough, owing partly to China’s own efforts to reduce its excess capacity. But Trump is not just addressing a non-issue. He is also inflaming passions and taxing US relationships with key allies. Worst of all, his actions are motivated by pure politics. He is eager to seem strong and confrontational in the eyes of his electoral base.

Even if Trump had no economists advising him, he would have to realize that what matters is the multilateral trade deficit, not bilateral trade deficits with any one country. Reducing imports from China will not create jobs in the US. Rather, it willincrease prices for ordinary Americans and create jobs in Bangladesh, Vietnam, or any other country that steps in to replace the imports that previously came from China. In the few instances where manufacturing does return to the US, it will probably not create jobs in the old Rust Belt. Instead, the goods are likely to be produced by robots, which are as likely to be located in high-tech centers as elsewhere.

Trump wants China to reduce its bilateral trade surplus with the US by $100 billion, which it could do by buying $100 billion worth of US oil or gas. But whether China were to reduce its purchases from elsewhere or simply sell the US oil or gas on to other places, there would be little if any effect on the US or global economy. Trump’s focus on the bilateral trade deficit is, frankly, silly.

Predictably, China has answered Trump’s tariffs by threatening to respond to their imposition with tariffs of its own. Those tariffs would affect US-made goods across a wide range of sectors, but disproportionately in areas where support for Trump has been strong.

China’s response has been firm and measured, aimed at avoiding both escalation and appeasement, which, when dealing with an unhinged bully, only encourages more aggression. One hopes that US courts or congressional Republicans will rein in Trump. But, then again, the Republican Party, standing in solidarity with Trump, seems suddenly to have forgotten its longstanding commitment to free trade, much like a few months ago, when it forgot its longstanding commitment to fiscal prudence.

More broadly, support for China within both the US and the European Union has been waning for a number of reasons. Looking beyond the US and European voters who are suffering from deindustrialization, the fact is that China is not the gold mine it was once perceived to be for American corporations.2

As Chinese firms have become more competitive, wages and environmental standards in China have risen. Meanwhile, China has been slow to open up its financial markets, much to the displeasure of Wall Street investors. Ironically, while Trump claims to be looking out for US industrial workers, the real winner from “successful” negotiations – which would spur China to open its markets further to insurance and other financial activities – is likely to be Wall Street.

Today’s trade conflict reveals the extent to which America has lost its dominant global position. When a poor, developing China started increasing its trade with the West a quarter-century ago, few imagined that it would now be the world’s industrial giant. China has already surpassed the US in manufacturing output, savings, trade, and even GDP when measured in terms of purchasing power parity.

Even more frightening to many in the advanced countries is the real possibility that, beyond catching up rapidly in its technological competence, China could actually lead in one of the key industries of the future: artificial intelligence. AI is based on big data, and the availability of data is fundamentally a political matter that implicates issues such as privacy, transparency, security, and the rules that frame economic competition.

The EU, for its part, seems highly concerned with protecting data privacy, whereas China does not. Unfortunately, that could give China a large advantage in developing AI. And advantages in AI will extend well beyond the technology sector, potentially to almost every sector of the economy. Clearly, there needs to be a global agreement to set standards for developing and deploying AI and related technologies. Europeans should not have to compromise their genuinely held concerns about privacy just to promote trade, which is simply a means (sometimes) to achieving higher living standards.

In the years ahead, we are going to have to figure out how to create a “fair” global trading regime among countries with fundamentally different economic systems, histories, cultures, and societal preferences. The danger of the Trump era is that while the world watches the US president’s Twitter feed and tries not to be pushed off one cliff or another, such real and difficult challenges are going unaddressed.