Thousands of Cuban people line the streets in Havana to greet Trudeau as he drives through the city in January 1976. Castro is with him in the open car. (Fred Chartrand/Canadian Press

Trudeau addresses a crowd of 20,000 Cubans as Castro listens during a rally in Cienfugeos, Cuba. (Fred Chartrand/Canadian Press)

In January 1976, then prime minister Pierre Elliott Trudeau rankled many when he became the first NATO leader to visit Fidel Castro's Cuba. The two got on famously, developing a close bond that would last for decades after that encounter.

Now, his son, Prime Minister Justin Trudeau, is heading to the Caribbean country Tuesday to try and rekindle the special bond as part of a three-country tour that will also take him to Argentina and Peru, where an APEC summit is being held.

The current prime minister faces a much different Cuba than his father, who descended on the fledgling Communist country at a tense time, while the Cold War was raging.

"Canadians imagine a special kind of relationship, because it's not one the Americans had, and it all harkens back to that Trudeau visit. We have been dining out on that idea in Cuba ever since," Robert Wright, the author of Three Nights in Havana, the definitive account of the trip, said in an interview with CBC News.

The historian said Canada has in recent years been relatively "nonchalant" about maintaining ties with Cuba. "I would dare say that the idea that Canadians had a special place in Cuba is probably disappearing very quickly ... because Americans are free to go to the island."

More than 250,000 people turned out on the streets of Havana to welcome Pierre Trudeau, Wright said, interpreting his visit as a friendly gesture amid global tumult.

But the visit wasn't quite as well-received in Canada, where critics said the prime minister was lending legitimacy to an authoritarian regime backed by the big guns in Moscow. 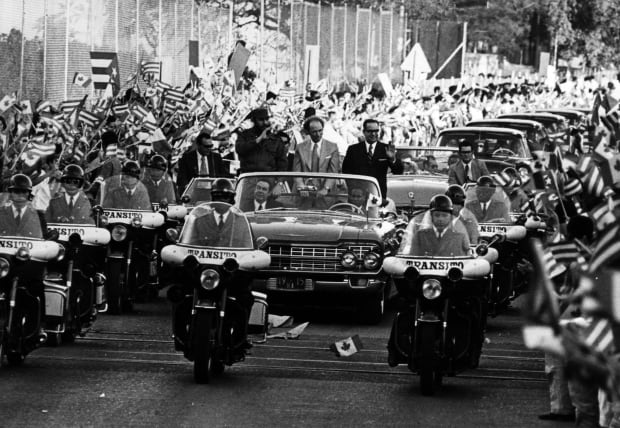 Thousands of Cuban people line the streets in Havana, Cuba, to greet Prime Minister Pierre Elliott Trudeau has he drives through the city in 1976. Fidel Castro is also along with him in the open car. (Fred Chartrand/Canadian Press)

Trudeau made the visit to damp down tensions, and to "see the humanity of the enemy," Wright said.

"Trudeau went expecting not to change Fidel's mind, or have his own mind changed, but rather to be able to sit down and speak respectfully with someone whose ideas he didn't share."

"These two somewhat aloof, cerebral, contained, emotionally unapproachable guys hit it off. Fidel was smitten by him."

Castro, who was seven years younger than Trudeau, came to see the Canadian leader as a mentor, someone he trusted, Wright said, and a leader with whom he regularly consulted.

It was more than friendly relations among world leaders, it was, as Alexandre Trudeau would write in a glowing tribute to the Cuban leader in a 2006 newspaper op-ed, "extra-political."

"Indeed, like my father, in private, Fidel is not a politician. He is more in the vein of a great adventurer or a great scientific mind. Fidel doesn't really do politics. He is a revolutionary."

Castro was particularly fond of Michel, Justin's late brother, who accompanied his father and mother, Margaret, on that 1976 trip.

"He was falling all over the baby, cooing for the cameras," Wright said. 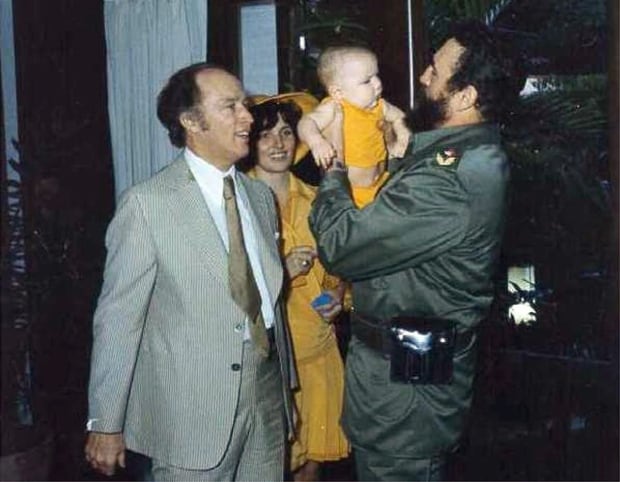 Castro later welcomed Michel to the island for special visits for many years after that first encounter — including one in early 1990s, when Justin tagged along.

Castro, Wright said, was devastated by Michel's death in an avalanche in 1998, and was equally distraught when Pierre Trudeau died. He made the trip to Montreal for Trudeau's state funeral, where he was seen hugging a teary Justin. 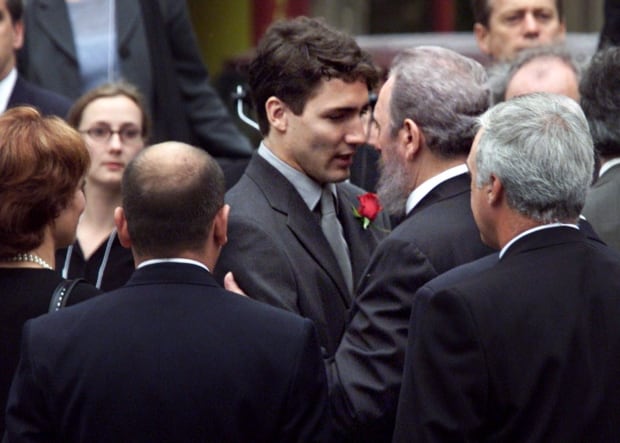 ?The prospect of the current prime minister replicating that sort of close, long-standing personal relationship with Raul Castro, Fidel's brother and successor, is unlikely, Wright said, in part because of the massive age gap between the two. (Raul is 85.)

The visit is also for roughly 24 hours, and won't include a great deal of personal time to forge closer ties.

"If 'Viva Raul' is uttered by the prime minister, I'd be very surprised," Wright said.

He also doesn't expect Trudeau to push too hard on the country's persistent problems with human rights, saying Trudeau will likely follow a similar tack to the one he took during a recent visit to China.

"It's not likely that he will go to Havana with any kind of heavy-handed agenda on political reforms. He has to walk that knife's edge."

But the trip to Havana won't be complete, Wright said, without paying a visit to his father's old chum.

"Presuming that Fidel is well enough, and lucid enough, to see him. I'd be very surprised if that wasn't on the agenda, even if briefly."

This article has been changed to remove a reference to Pierre Trudeau being the first Western leader to visit Cuba after the revolution. The Swedish prime minister was the first Western head of government to visit in 1975.  Nov 29, 2016 10:43 AM ET

Pierre Trudeau carries son Justin on a 1973 walk to the Governor-General’s Residence: ‘Peter Bregg’s images of Pierre and the kids growing up are all very special. Bregg is a very friendly and helpful photographer. It’s not just about taking great photos, but the relationships you establish that can last a lifetime.’

Justin Trudeau on Fidel Castro: 'A legendary revolutionary' who improved education and healthcare

Trudeau recently travelled to Cuba but was unable to meet with Castro, who had been a friend of his father

A grieving Justin Trudeau is consoled by Cuban President Fidel Castro in front of Notre Dame Church prior to the funeral of Pierre Trudeau.

“It is with deep sorrow that I learned today of the death of Cuba’s longest serving President.

“Fidel Castro was a larger than life leader who served his people for almost half a century. A legendary revolutionary and orator, Mr. Castro made significant improvements to the education and healthcare of his island nation.

“While a controversial figure, both Mr. Castro’s supporters and detractors recognized his tremendous dedication and love for the Cuban people who had a deep and lasting affection for “el Comandante”.

“I know my father was very proud to call him a friend and I had the opportunity to meet Fidel when my father passed away. It was also a real honour to meet his three sons and his brother President Raúl Castro during my recent visit to Cuba.

“On behalf of all Canadians, Sophie and I offer our deepest condolences to the family, friends and many, many supporters of Mr. Castro. We join the people of Cuba today in mourning the loss of this remarkable leader.”
[/np_storybar]

The prime minister is facing criticism at home and abroad for his statement expressing “deep sorrow” about the death of former Cuban president Fidel Castro.

Justin Trudeau, who recently returned from a diplomatic visit to Cuba, made the statement early Saturday after the announcement that Castro had died at the age of 90.

Trudeau acknowledged the late president was a “controversial figure,” but remembered him as a “larger-than-life leader,” who made significant improvements to Cuba’s education and health-care systems.

“A legendary revolutionary and orator, Mr. Castro made significant improvements to the education and health care of his island nation,” Trudeau said.

“I know my father was very proud to call him a friend,” he added.

But others in Canada — and around the world — were less generous in their description of the deceased, and some have condemned the prime minister’s statement, pointing out human rights violations during Castro’s half-century regime.

Conservative leadership hopeful Lisa Raitt wrote on Facebook that Trudeau should be ashamed of himself after his remarks.

“With those words, Justin Trudeau has placed himself on the wrong side of history — against the millions of Cubans yearning for freedom. The prime minister should be ashamed of himself. He must retract this statement and apologize,” she wrote.

Others running to be party leader also weighed in, including Maxime Bernier and Kellie Leitch.

Robert Wright, who wrote the book “Three Nights in Havana” about the relationship between Castro and Pierre Trudeau, said it made sense Trudeau would express warm condolences for Castro.

“He has to walk a knife’s edge,” he said. “Canadians have a long, rather proper diplomatic relationship with revolutionary Cuba.”

“On the one hand Justin Trudeau has his family inheritance: his father’s very, very warm friendship with Fidel Castro, and Justin’s own warm rapport with the Cubans,” Wright said. “And on the other hand, he has to face criticism when Raul Castro says Cuba will take its own time on democratic reforms and won’t be rushed by Obama or Justin Trudeau or anyone else.”

Castro acted as an honorary pallbearer at Pierre Trudeau’s funeral, along with Leonard Cohen, former U.S. president Jimmy Carter and the Aga Khan.

In his statement, Trudeau offered his condolences “on behalf of Canadians,” a move Wright said is likely to upset some Canadians who wouldn’t want to be included in such “warm remarks.”

Trudeau’s former foreign policy adviser Roland Paris was among those taking the prime minister to task, saying on Twitter “It’s not a statement I would have recommended.”

Website Breitbart News, which was previously run by president-elect Donald Trump’s senior strategist, called the prime minister a “pretty little liar” in response to his comments.

And Ian Bremmer, an American political scientist who specializes in U.S. foreign policy, tweeted that “Cuban citizens and exiles deserve better” from Trudeau.

Speaking iMadagascar, where he is attending the summit of la Francophonie, Trudeau says he understands that some affected by the Castro regime would view things differently

ANTANANARIVO, Madagascar — Prime Minister Justin Trudeau said the former Cuban president Fidel Castro was a dictator, but that does not mean it was inappropriate to acknowledge his achievements at the time of his death.

Trudeau said the statement Saturday was meant to mark the death of a former head of a country with which Canada has had a long relationship.
Speaking in Antananarivo, Madagascar, where he is attending the summit of la Francophonie, Trudeau said he understands that some people who had been affected by the Castro regime would view things differently.

“He certainly was a polarizing figure and there certainly were significant concerns around human rights,” Trudeau told reporters Sunday. “That’s something that I’m open about and highlighted, but on the passing of his death I expressed a statement that highlighted the deep connection between the people of Canada and the people of Cuba.”

Trudeau said he never shies away from raising human rights issues, including on his recent visit to Cuba.

“Canadians know that I always talk about human rights, including here yesterday, including with Raul Castro two weeks ago and wherever I go around the world,” he said.

The Liberal prime minister is facing criticism at home and abroad for his statement expressing “deep sorrow” about the death of Castro, without mentioning his human rights violations.

Trudeau, who made the statement early Saturday after the announcement that Castro had died at the age of 90, called him a “legendary revolutionary and orator” who made significant improvements to Cuba’s education and health-care systems.

“I know my father was very proud to call him a friend,” Trudeau also said in his statement.

And social media users also took the opportunity to mock the prime minister using the hashtag “#TrudeauEulogies,” which imagines eulogies of dictators and criminals written in the style of Trudeau’s statement.

“Yes, his accomplishments will be (remembered) in various tones of grey — some white, some black — but historians will have to decide this,” Couillard said. “I see no controversy in describing him as a giant of the 20th century.”