"We Have Plunged Libya Into 'Anomie'": Macron Recognises NATO's Responsibility..

In front of Tunisian parliamentarians, Emmanuel Macron delivered a very frank speech about the responsibility of Western countries in the current situation of Libya, evoking the Syrian issue.

Rarely has a leader of a NATO member state been so far in recognizing responsibility for the 2011 western intervention in Libya in the country’s state today: in a speech to Tunisian deputies On 1 February, French President Emmanuel Macron declared that “Europe, the United States and some others [have] a responsibility in the current situation in Libya”. 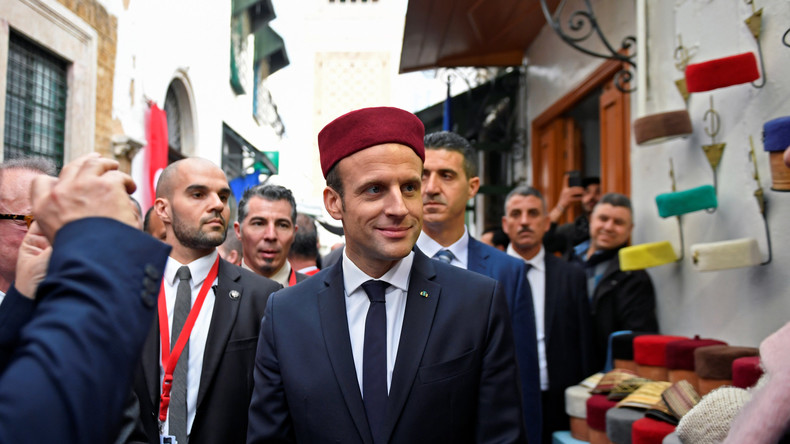 Source: Reuters
Emmanuel Macron on a state visit to Tunisia

“The idea of ??unilaterally and militarily resolving a country’s situation is a misconception,” he said to the Tunisian parliamentarians’ applause. “I do not forget that many decided that we had to finish with the Libyan leader without there being any project for the continuation”, he added, implicitly referring to Nicolas Sarkozy, who had engaged France in an intervention aimed at dislodging Muammar Gaddafi from power. “We have collectively plunged Libya since those years into anomie without being able to resolve the situation,” he added.

While the security risks posed by political instability and violence in Libya are now also weighing on Tunisia, the speech of Emmanuel Macron has taken a particular resonance. But it is undoubtedly the situation in Syria, which many Western chancelleries have called for the resignation of President Bashar al-Assad in recent years, that the French head of state thought when he said: “Whatever “One thinks of a leader, [one can not] imagine that [one] can substitute for the sovereignty of a people to decide its future”.

Libya has been plunged into chaos since Western intervention and the fall of Muammar Gaddafi in 2011. Two authorities are fighting for power today. On the one hand, the national unity government, recognized by the international community and based in Tripoli. On the other hand, an authority exercising power in the east of the country, with the support of Marshal  Khalifa Haftar  who holds his legitimacy for his military success on the ground.

France's President Emmanuel Macron paid tribute to Tunisian’s transition to democracy in a speech to parliament on Thursday, pledging to boost French investment in the country in order to buttress its faltering economy.

Addressing lawmakers in Tunis, Macron paid lengthy tribute to Tunisia's 2011 revolution, the first of the Arab Spring uprisings, and to its efforts to build a democratic system, saying they remained an example for a troubled region.

"The challenge which is yours today is to transform this cultural and democratic spring into a political, economic and social spring," that benefited all social classes, he said.

Macron's visit comes less than a month after protests erupted in towns and cities across Tunisia, triggered by price and tax hikes.

Though Tunisia has won praise for political compromises and a 2014 democratic constitution, successive governments have failed to resolve deep economic and social problems including high youth unemployment and marginalisation in the country's interior.

Activists say some democratic freedoms appear to have been eroded, criticising mass arrests carried out during the recent demonstrations.

As Macron visited, protesters calling for jobs brought all production in the country's declining phosphate industry to a halt by staging sit-ins at plants, an official said.

Macron told lawmakers they had a "vast responsibility" to ensure that "nothing that has been undertaken in the last few years is weakened or overturned".

To support job creation, Macron said he aims to double the rate of French private sector investment over the five years of his term, which ends in 2022.

"A number of companies have already confirmed their willingness to invest," the French president said, without naming any.

French direct investment in Tunisia was worth 3.3 billion dinars ($1.39 billion) in 2016, making it the second biggest foreign investor behind the United Arab Emirates, according to figures from the French economy ministry.

Macron had pledged more than €270 million ($335 million) in new financing for Tunisia on Wednesday, as he began his two-day state visit.

In his speech to parliament, Macron also said France would put all its energy into finding a solution to the conflict in neighbouring Libya and would push for elections to be held there by the end of the year.

He said Western powers had a special “responsibility” towards Libya, criticizing the 2011 NATO intervention sponsored by his predecessor, Nicolas Sarkozy, for leaving the country prey to instability and extremism.

www.independent.co.uk › News › World › Europe
Aug 30, 2017 - Emmanuel Macron's plans for asylum requests to be handled in Libya, Chad and Niger to try and stem the flow of refugees to Europe has been branded “racist and inhumane” by left-wingers in the European Parliament. The leaders of France, Germany, Italy and Spain agreed the plan to stem the flow of ...

dailypost.ng › News
Nov 28, 2017 - ... Emmanuel Macron said on Tuesday he would ask European leaders to help evacuate Africans in danger in Lybia after reports appearing to show African migrants being traded there sparked an international outcry. “I will propose that Africa and Europe come to the rescue of the people trapped in Libya, ...

From Ambition to Style to Substance: Emmanuel Macron Makes His Mark on France ...

Macron's Right: Africans Really Are Enslaving Other Africans, But ...

The Big Lie About the Libyan War – Foreign Policy