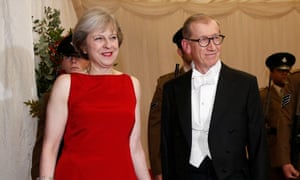 The last time a new prime minister matched Theresa May’s double-digit personal approval ratings so far into their first year in power, it was John Major back in the 1990s. The “not Thatcher” bounce saw him all the way to an unexpected election victory in 1992, but it ended swiftly, thereafter, as he dropped into the bottomless pit of pain that was the Tory party spawning its Ukip tendency.

May also offers a clear break with the past. Her style, and appeal, are different, but she shares one characteristic with Major: a gritty determination to be as dull as it is possible to be while also leading a major western power.

For the interview in the latest US Vogue – which was done in January but has just been published – you might have supposed her media advisers would have dug up some sexy little nugget of new information, or at least given the reporter the access to allow her to find something for herself. Instead everything we already know about the May brand is thumped home again. Even the Daily Mail, her most loyal cheerleader, could only get mildly excited by the news that her husband Philip cooks a mean risotto.

Her political manifesto is already familiar. She cares that people feel she is delivering for them. She sees that as the prerequisite to restoring trust with the electorate. She thinks liberty is marginally more important than security, but she puts opportunity ahead of both. She doesn’t mind if people don’t like her.

These stolid, small-c conservative virtues come clothed in an unexpectedly colourful and often stylish wardrobe that are both the most visible and, so far, the most obviously unexpected thing about her. She is bold, in the context of a Tory MP from Maidenhead. She is occasionally extravagant, although she seems to have learned her lesson after Trousergate, when she was pictured on a cream sofa in No 10 wearing the kind of soft leather trousers that wouldn’t leave you much change from £1,000 (although very convincing fakes come a lot cheaper). She hit back hard when a backbencher, Nicky Morgan, criticised her extravagance, excluding her from a Downing Street meeting (in itself an extraordinarily unsubtle display of power). All the same, the message clearly hit home.

The outfits she wears in the pictures released so far by Vogue show her in an impeccably high street LK Bennett dress, the kind of thing the Duchess of Cambridge wears to show that even if she lives in a palace, she has her feet on the ground. The total spend of the widely used shot of her on a sofa in front of the fireplace is estimated at less than £700. Very mid-market, and probably a disappointment to the big names such as Burberry or Alexander McQueen, which have a big US market.

Because if it weren’t for the price tag, May could be expected to be an enthusiast for couture. For a woman whose politics are so studiously unflamboyant, in terms of fashion she is not afraid to take risks. Experimenting with your look for the unforgiving lens of the popular press takes a certain steeliness. It reinforces her reputation as a woman who doesn’t mind not being liked.

She also has a thing about Vogue. It was her luxury item on Desert Island Discs and its editor-in-chief, Anna Wintour, was made a dame in the New Year honours (in which, in a further reflection of her interest, Victoria Beckham got an OBE). It is not necessary to be a miserable cynic to ponder the coincidence of the DBE and the flattering profile in the recipient’s publication.

Wintour is a prominent Democrat supporter, and in a thin field, perhaps the most telling political observation in the May profile is that her politics are a lot closer to Hillary Clinton’s than to those of Donald Trump. Yet now May sort-of-dismisses the feminism in whose name she drove through reforms in the Tory party that over the past 15 years have transformed its appearance and allowed her to form a cabinet that is nearly a third women (most of whom owe their entry into politics to her reforms).

But then, she will have observed how Clinton’s defeat last year owed something to the hostility that feminism engenders among a certain group of voters not unlike some of the core Brexiteers in Britain. May knows they are not her only audience, but they are the ones she means to do business with.