Bloggers and digital influencers are reshaping the fashion and beauty landscape

In early June, Arielle Charnas of Something Navy posted about the Peter Thomas Roth Rose Stem Cell Bio-Repair Gel Mask on her Snapchat story. Then the frenzy happened: Within 24 hours after her story went live, the post was responsible for the sale of 502 masks, or $17,565 worth of product. Do the math: that’s equal to $123,000 in sales in a week, $527,000 in a month or almost $6.4 million in a year.

It’s not only beauty she has that impact on.

Last week, Charnas hosted a public appearance at activewear retailer Bandier in New York’s Flatiron District to toast her collaboration with Koral: Something Navy x Koral. She expected a few hundred people — at most — to show up on the steamy evening in late July. Instead, 1,000 of her fans snaked around Fifth Avenue — some flying in from as far away as Toronto to meet the 29-year-old influencer.

What fashion or beauty editor can draw that kind of crowd?

Welcome to the new influencers: digital natives who post, snap and tweet to their hundreds of thousands or even millions of followers — who then rush out and buy the products they recommend. Gone are the days when women took their beauty tips mainly from fashion and beauty magazines. In the digital age, those titles — and their editors — are quickly becoming almost irrelevant, not only to consumers but to the brands themselves.

While the brands are reluctant to admit it, their actions speak volumes. Take Coty Inc., the fragrance licensee for Marc Jacobs. The beauty giant hosted its press event for the designer’s new fragrance, Divine Decadence, on July 21 at the Ace United Artists Theatre in downtown Los Angeles. The event was only a few weeks before the fragrance hits counters — timed to enable influencers to build buzz online about the scent and drive consumers to rush out and buy it. Coty flew in influencers from China to Canada for the party, said Lori Singer, group vice president of global marketing at Coty.

The launch showed how rapidly power has shifted in the beauty world. A year earlier, Coty held a similar event for the original Decadence, but that one occurred in May to coincide with long-lead magazines’ publishing schedules for September issues.

For decades, editors and magazines were the be all and end all in beauty. Readers pored over pages to find out what products they needed to buy and ads were aplenty. But then came social media — as well as bloggers, then vloggers and now the new buzzword “digital influencers” — and writers-for-hire, and suddenly magazine editors had a new peer.

Over the past several years, the bloggers once seen as “pretend journalists” have overtaken the beauty editors — not to mention the magazines they work for as more and more beauty brands switch the majority of their ad spending to social media sites. Perhaps annoying for the beauty editors who see themselves as true journalists, the influencers are being paid megabucks to voice their opinions — a reported seven figures in the case of 22-year-old blogger Kristina Bazan and L’Oréal. 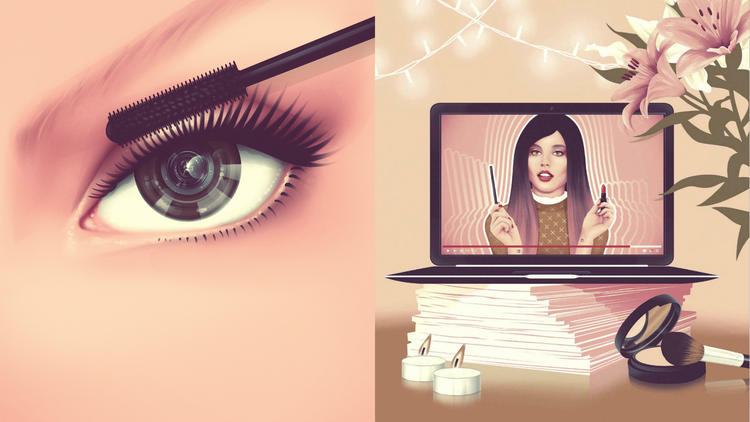 Even more upsetting for beauty editors: The credibility of a blogger versus a beauty journalist does not seem to be an issue to consumers seeking information wherever they can find it. In their view, their favorite bloggers and digital influencers are as credible as a magazine — maybe even more so. Bloggers’ followers trust them, said nearly every person interviewed for this story, and as long as sponsored posts are clearly labeled as such, an influencer’s individuality and authentic voice allows them to connect to readers in a way that magazines are struggling to do.

“The new celebrities are the social influencers, and quite honestly some make more money than the people who get Emmy Awards,” said John Demsey, executive group president at Estée Lauder Cos. Inc. “If you can deliver an audience and prove that someone can buy your product, you can get paid. As long as that works it will continue to blossom.”

As a result, several brands at Estée Lauder Cos. have undergone significant shifts in budgets, with a larger-than-ever portion allotted to digital strategy, from paid search to content to influencer activations. Estée Lauder has significantly cut back on its traditional media spend to focus on digital, and Smashbox walked away from traditional print media altogether two-and-a-half years ago.

The shift has fashion and beauty titles scrambling to adjust to the new reality. Allure’s founding editor of 24 years, Linda Wells, was pushed out late last year in favor of a younger, more digital-savvy editor in chief and the staff has been readjusted to add writers with more online experience. It’s a change being seen across the media landscape as titles rush to try to rescue whatever beauty ads they have left — and hopefully add more, since industry leaders such as L’Oréal and Estée Lauder were long among the largest print advertisers.

Michelle Lee, the former editor of Nylon who was named editor in chief of Allure in November, told WWD that although there was some “animosity” toward influencers as a group when they started to gain popularity, she took a different approach. Allure works in tandem with these “great voices,” and has coproduced content with Life With Me’s Marianna Hewitt and Style Me Grasie’s Grasie Mercedes.

For Lee beauty influencers and traditional beauty editors are complimentary, and one doesn’t cancel out the other. Beauty editors spend their days in the market, reporting and researching. She likened it to an “apples and oranges” comparison, but believes both can “play in the sandbox together.”

“They themselves help to identify and set trends,” Lee said of editors, drawing a stark contrast to influencers, whose level of opinion and experimentation enable them to connect with audiences on a more personal level.

“The rigorous reporting and research plus fact-checking behind what an Allure editor says is completely different from a personal, singular opinion that an influencer offers. That’s not to take away from the power that either of them have. They’re just different,” Lee said.

Opinions differ on whether it’s only a matter of time before beauty titles are supplanted by digital influencers or a happy stasis will be reached in a new digital-first media reality.

Demsey insisted that a handful of heritage beauty brands — i.e., those aimed at an older consumer — still depend heavily on magazines and tried-and-true TV spots to speak to the majority of their consumers. Take the case of Clinique, he said, whose average customer starts at age 45 and is a “traditional” shopper who buys in-store and likes her gift with purchase.

Estée Lauder is another megabrand that relies on traditional advertising channels, per Demsey — but at the end of 2014 decided to use Kendall Jenner to reach the Millennial customer who it’s long had difficulty connecting with. The decision to use the then-19-year-old was met with skepticism given the brand is targeted at women more than two to three times her age. Estée Lauder’s reasoning for using Kim Kardashian’s kid sister was a simple one of numbers: Jenner has more than 62 million Instagram followers (at the time the partnership was revealed she had around 16 million).