Wherever men’s fashion goes, Ben Cobb is there. This summer, in London, Milan, Paris and New York, there he was, seated in the front row at almost every runway show. And when he’s on the street outside the venues, the street-style photographers can’t resist taking his picture.

He has a signature look, with the dark mustache, the tightly fitted, flare-legged trousers, the silk shirt unbuttoned halfway to the navel. A Vogue blog post focused on Mr. Cobb in making the case for the return of the sleazy guy.

It’s natural to assume that his head-to-toe retro look is a fashion-world costume. But for Mr. Cobb, the editor in chief of the British fashion magazine Another Man, every day is, sartorially speaking, 1974. The decade called to him, and he listened.

“Most things I love fall into that whole era for some reason,” Mr. Cobb said. “The fashion in that era — I still think there’s something really magical about that time that, for me anyway, never gets boring.” 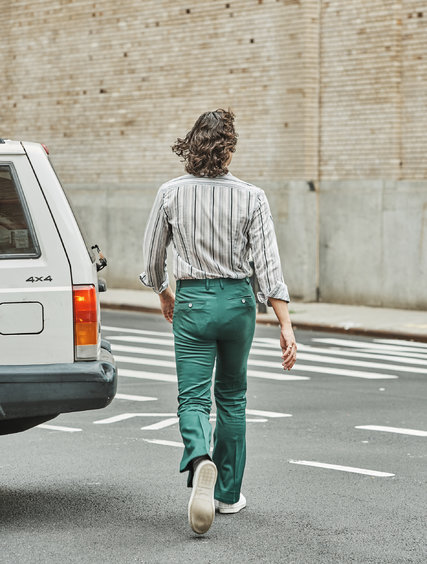 Mr. Cobb was sitting in the bar of his hotel, the Loews Regency, between appointments during his visit to New York last month. He had on Gucci flares, a white Louis Vuitton shirt and black Saint Laurent boots. Necklaces dangled from his neck. Now and then patrons looked at him in wonder, as you would when encountering unfrozen ’70s Man.

Mr. Cobb, 40, who is soft-spoken, said he arrived at his signature look many years ago through watching period films — specifically, Italian cult horror and crime movies like “Four Flies on Grey Velvet” and “Live Like a Cop, Die Like a Man.”

“The aesthetic in the movies is incredible,” he said. “All the men looked amazing.” Speaking more broadly about Hollywood actors in that period, like Robert Redford and Jack Nicholson, he added, “They were allowed to express themselves and be every version of masculinity.”

Mr. Cobb was asked how he has been able to dress like Maurizio Merli or Robert Redford in “Three Days of the Condor” during the recent era of skinny jeans and shrunken suits. Does he wear a lot of vintage?

“I have Saint Laurent blazers, a couple of suits,” he said. “With some of the blazers, the proportion of the lapels, it can almost veer into parody. You never want to be a caricature.”

Instead, he said, he finds plenty of choices in today’s luxury men’s wear, especially as much of it seems to recycle the 1970s. He’s partial to Tom Ford, Gucci, “bits of Fendi” and Dries Van Noten, and when he finds something he likes, he buys in multiples.

“At the moment, I get all my trousers from Gucci,” he said. “I have these trousers in loads of different colors. I love them. Shoe-wise, I love Hedi’s Saint Laurent boots.” After it was announced that Hedi Slimane would be leaving the label, “I went and bought a whole bundle,” Mr. Cobb said.

He was born and raised in London, the son of a graphic designer father and a mother who studied fashion at Central Saint Martins. Now he lives in an apartment in that city’s Maida Vale neighborhood painted dark brown with gold accents in the décor.

The inspirations for his home were the ’70s-era designer David Hicks and Billy Baldwin, the noted purveyor of Hollywood Regency. “I live in a bubble,” Mr. Cobb said.

Still, despite his retro aesthetic, he sees himself as of the moment. True style, he said, is mixing the old and the new in a way that reveals your personality.

“You’ve chosen those things and put them together in a certain way, and that’s what gives them that cohesiveness,” Mr. Cobb said.

So how did he feel about being called sleazy in Vogue? Did he take it as a compliment?

“I take everything as a compliment,” Mr. Cobb said, smiling. “That’s the best way through life, right? One person’s sleaze is another’s romanticism.”