rise of the French worker\'s jacket

From fields to catwalk: rise of the French worker's jacket

A few years ago I was walking in London’s Spitalfields market when I came across several rails of dark blue jackets. Or rather, half-jackets. You wouldn’t have wanted to wear one up a mountain but they wouldn’t have been suitable for a funeral either. They were scruffily formal; casual but smart enough to do dinner as long as the Queen wasn’t there. The best thing were the pockets: fat envelopes of fabric on each side, big enough to wedge in a cold hand or an average-sized paperback, as well as an unexpected inner pocket on the right. How French. Mine cost £25 and I have worn it most days since, making it value-competitive with my socks. I have relished its practicality and dirt-resistance. Also that it says I have thought about what I am wearing but only very quietly.

Nothing lasts. Whatever island of trendless fortitude you think you have found, eventually the fashion navy will cruise into view. I suppose if they were being sold in Spitalfields these shirt-jackets – shackets, if you will (you probably won’t) – must already have had some claim on fashionability but nothing like what’s happened recently.

They are everywhere, with the crowning achievement being the outsized women’s version in the spring 2016 collection from Vetements, the Most Fashionable Label In The World Right Now. If fashion works upwards, the shacket might have started at the bottom, but it is now very much here. Lest anyone accuse the trendmakers of not having a keen sense of oxymoron, they’re under the title of “French workers”. 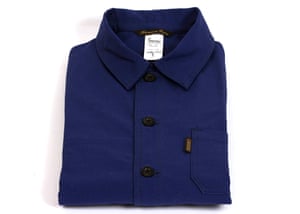 “French chore jackets have been around since the late 1800s,” says Ian Johnstone from London’s Shopkeeper store, which does a brisk trade in them. “They were worn daily with matching trousers. The most favoured colour was blue as this was generally worn by farmers, craftsman, auto workers and railway workers. Black was the preferred choice for carpenters, but some other workers would also keep a black version for church on Sundays.”

“They have had a huge resurgence over the past five years; now every menswear brand will have a cotton version in their range,” he says. He has sold jackets from Le Laboureur, a traditional workers’ manufacturer, since he founded his shop three years ago. They have always been popular; now there is often a waiting list. “No one else was selling them and they are quite hard to come by. We sell them to every age group. They are popular with a new younger generation that are really into workwear brands and the utility look, but we also sell to 35- to 45- year-olds that have grown up with that look.”

Two other original French brands are Le Mont Saint Michel and Vetra – the latter recently collaborated on a version with Margaret Howell. Typically the jackets are made from heavy cotton drill or heavy cotton moleskin. The two most popular blues are Hydrone and Bugatti, the latter slightly brighter. But these “original” jackets are much more expensive than the market stall options, being anything from £140 upwards. Perhaps I’m being naive, but I can’t imagine the Marseille track-layers of the 1900s spending that much on workwear.

After I took to wearing mine, I noticed fashion people started referring me to “Bill”, a mysterious figure who turned out to be Bill Cunningham, the influential 87-year-old New York fashion photographer with an unvarying look: smart shirt, khaki trousers and a deep blue chore jacket. He became a kind of inadvertent style icon – some refer to the colour as “Bill Cunningham blue”. But when he picked his up from a market in Paris – or so the story goes – he was just looking for something practical. He liked the pockets.

After years of build-up, the jackets have hit the apogee of Vetements. The only way is down. Like a stopped clock waiting to be wrong again, I look forward to the new wave of old-style French worker jackets to start appearing in charity shops, stained with coconut water and Diet Coke rather than oil and engine grease.