WASHINGTON — Gov. Mike Pence came to Capitol Hill on Tuesday on a mission to promote Republican unity, attacking Hillary Clinton for describing many supporters of the G.O.P. ticket as bigoted “deplorables” and urging Republicans to rally behind their nominee, Donald J. Trump.

But Mr. Pence struggled to press the attack: In separate news conferences, House and Senate Republican leaders declined to join Mr. Pence, the Indiana governor and vice-presidential nominee, in rebuking Mrs. Clinton over her remark.

Mr. Pence wound up raising the subject only when pressed by a reporter — and then gave a halting answer in which he would not call David Duke, a white supremacist and onetime Ku Klux Klan leader, “deplorable.” He insisted instead that Mrs. Clinton did not have “that bad man” in mind when she assailed Mr. Trump’s supporters.

It was a noticeable break in stride for the Trump campaign, which had zeroed in on Mrs. Clinton’s remark at a Manhattan fund-raiser Friday night — one for which she expressed regret the next day — running a new commercial and dispatching surrogates to attack her for what Mr. Trump has termed a “slander” of his “wonderful, amazing” followers.

Congressional Republicans were even blunter in private.

An otherwise friendly morning meeting with House Republicans turned awkward when Mr. Pence was pressed by Representative Jeff Fortenberry of Nebraska about Mr. Trump’s difficulties with women, said two House Republicans who relayed the conversation. Mr. Fortenberry told Mr. Pence that his young daughter had come to him and said, “Daddy, Donald Trump hates women,” according to one of the lawmakers, who both insisted on anonymity to recount a private conversation.

Mr. Pence faced resistance again when he met privately with Senators Mike Lee of Utah and Ted Cruz of Texas, neither of whom has endorsed Mr. Trump. Mr. Lee pressed the governor on his reluctance to denounce Mr. Duke and the so-called alt-right movement more explicitly, stressing “that Republicans must identify David Duke’s racism as deplorable,” according to Conn Carroll, a spokesman for Mr. Lee.

Mr. Pence was greeted warmly by Senate Republicans when he joined them for a lunch of Chick-fil-A sandwiches, but received a firm rebuke from John McCain of Arizona, the chairman of the Armed Services Committee. Calling Vladimir V. Putin, the Russian president, “a thug and a butcher,” Mr. McCain said Mr. Trump’s embrace of the autocratic ruler was unacceptable, according to a Republican official present who also insisted on anonymity. 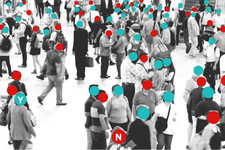 Graphic | For Every 10 U.S. Adults, Six Vote and Four Don’t. What Separates Them? People are motivated to vote by a combination of individual priorities, group culture, candidate outreach, and how easy or hard it is to cast a ballot.

Mr. Pence insisted that he and Mr. Trump were trying to belittle President Obama rather than to laud Mr. Putin.

The very nature of Mr. Pence’s visit to Capitol Hill offered some insights as to why Mr. Trump, who had his own testy visit with Senate Republicans here in July, is still confronting difficulties with his party. Playing the part of troubleshooting diplomat as much as running mate, Mr. Pence spent much of the day behind closed doors reassuring his former colleagues, with whom he retains close ties, that they could trust Mr. Trump. Mr. Pence said Mr. Trump behaved differently in private, and even had a spiritual side.

Congressional Republicans said they were pleased that the presidential race was tightening and that Mr. Trump appeared more viable, partly because their own prospects depend on his being competitive enough that Republicans still bother to vote.

With his modest uptick in the polls, Mr. Trump may have forestalled an outright break with Republicans in Congress. As recently as a few weeks ago, party leaders and strategists in Washington were preparing to take emergency measures, having their candidates disavow Mr. Trump and present themselves to voters as a counterweight to a President Clinton.

Republicans may still activate those plans if Mr. Trump stumbles badly against Mrs. Clinton in the final stretch of the race. But for now, the party has adopted a middle-ground approach, with most Republicans in Washington nominally supporting Mr. Trump while advancing campaign messages that differ widely from his in almost every respect.

That distance was on display when congressional Republicans refrained from echoing Mr. Trump’s indictment of Mrs. Clinton over her saying that half his supporters were bigots, sexists and homophobes.

Few Republicans want to confront thorny follow-up questions about Mr. Trump’s supporters, and fewer still want to make matters of race, gender and sexual orientation central to their campaigns. The silence about what has for the last three days been at the core of Mr. Trump’s campaign also underscored a more fundamental gap: Republicans on Capitol Hill have their own agenda and intend to run their campaigns apart from Mr. Trump — not as a unified ticket.

So Speaker Paul D. Ryan tried to use his news conference with Mr. Pence to promote his own “Better Way” proposals on the economy, military and poverty, which were formulated separately from the Trump campaign.

David Winston, a Republican pollster who advises congressional leaders, said lawmakers were right to focus on their own political interests.

“That’s a Hillary Clinton statement, and that’s who Trump is running against,” Mr. Winston said of the “deplorables” debate. “For a lot of these members, what they’re trying to do is define their view of the future in contrast to what they’re facing. These are members representing individual districts with specific concerns.”

That Mr. Pence had to assume a Willy Loman-meets-Henry Kissinger role and sell elected Republicans on Mr. Trump’s merits less than two months before Election Day illustrates the unique challenges Republicans are facing.

By contrast, Senator Tim Kaine of Virginia, Mrs. Clinton’s running mate, is spending much of his time appealing to voters in swing states — not pleading with recalcitrant Democrats in Senate cloakrooms to endorse their nominee.

Mr. Pence was plainly unable to win over Republican holdouts. Representative Carlos Curbelo, a first-term Florida congressman who has said he will not vote for Mr. Trump, was left pining for an alternative reality.

“The country would probably be more pleased with the vice-presidential candidates than the two candidates at the top,” Mr. Curbelo said with a grin.

Representative Lee Zeldin of New York, a Long Island Republican who supports Mr. Trump, said it was widely accepted that some Republicans would seek distance from the national ticket and focus on a congressional agenda.

But Mr. Zeldin urged Republicans to take sides in the presidential race, and said he planned to talk “not only about issues impacting the next Congress, but also understanding that who is in the White House is important.”

Find out what you need to know about the 2016 presidential race today, and get politics news updates via Facebook, Twitter and the First Draft newsletter.