Gov. Mike Pence of Indiana has so far played the role of Donald J. Trump’s translator to conservatives, character witness to evangelical Christians, and clarifier in chief, issuing explanatory statements after Mr. Trump has committed a variety of unforced political errors.

By now, he had hoped to add another line to his 2016 political résumé: surrogate in chief, stumping with and raising money for Republican Senate candidates.

But, especially among vulnerable incumbents, the reception has been tentative at best.

The problem is not Mr. Pence, strictly speaking: He is largely viewed with respect and appreciation by fellow Republicans. The problem is the man on top of the ticket — and the fear that Mr. Pence is an unwitting carrier of a kind of political toxicity.

“This notion that, ‘I’m Mike Pence, I’m here to help, and people won’t notice I’m associated with Donald Trump,’ in these close Senate races, is notionally absurd,” said Steve Schmidt, a Republican strategist who was a senior adviser to John McCain’s 2008 presidential campaign. “The association with Trump that Pence brings into your campaign — I think most Senate candidates are going to want Mike Pence in their states the way they’re going to want a mosquito bite in Miami.”

Aides to Republicans in several contested Senate races, when asked if their candidates had any plans to appear with Mr. Pence, politely demurred.

“Kelly is focused on the Senate race and talking to as many New Hampshire voters as she can, and we’ll see what happens,” said Liz Johnson, a spokeswoman for Senator Kelly Ayotte of New Hampshire.

“We look forward to helping Republicans up and down the ticket to make sure career politicians from the past like Senator Feingold and Hillary Clinton aren’t elected,” said Brian Reisinger, a spokesman for Senator Ron Johnson of Wisconsin.

And from the team of Senator Patrick J. Toomey of Pennsylvania: “Pat and Mike are friends, and Pat would be happy to see him in Pennsylvania, but there are no plans to campaign together at this time,” said Ted Kwong, a campaign spokesman.

Even the campaign of Senator Rob Portman of Ohio, who has endorsed Mr. Trump, said the senator had no events scheduled with Mr. Pence, though he was “not closing the door.”

At one point after his selection by Mr. Trump, Mr. Pence — the understated, mild-mannered half of the Republican ticket — was expected to play the role of national cheerleader, bringing party loyalty and a frisson of presidential-level excitement to the aid of Republicans in statewide and Senate races and helping to rally conservative voters to turn out in November.

“Pence gives vulnerable senators an opportunity to campaign with the presidential ticket without the baggage of the photo op with Donald Trump,” said Nathan Gonzales, editor of The Rothenberg and Gonzales Political Report. “Trump makes it hard for many Republicans to be excited or unified about this entire election, but Pence is a breath of fresh air for them.”

But that may be in doubt, as Mr. Pence has increasingly backed up Mr. Trump, echoing some of his more contentious statements. 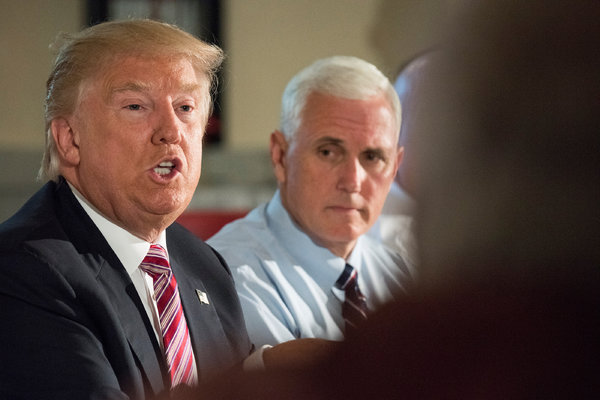 Mr. Trump and Mr. Pence met with union and labor leaders at an American Legion post in Brook Park, Ohio, on Monday.
TY WRIGHT FOR THE NEW YORK TIMES

“I think it’s inarguable that Vladimir Putin has been a stronger leader in his country than Barack Obama has been in this country,” Mr. Pence said.

Mr. Pence did, however, break with Mr. Trump in saying he believes Mr. Obama was born in the United States. And he promised to release his own tax returns — though it remained unclear whether Mr. Trump would follow suit.

Some high-profile appearances involving Mr. Pence may yet unfold: His aides have held discussions with several Senate campaigns, including that of Senator Marco Rubio of Florida, about coordinating joint outings. (“Marco has tremendous respect and admiration for Governor Pence,” said Olivia Perez-Cubas, a campaign spokeswoman, “but we have no joint events scheduled with him at this time.”)

To be sure, Mr. Pence is no outcast: Some Republicans believe that he can help shore up the party’s base in states like Arizona, Georgia and Missouri, helping to energize social conservatives who appreciate his opposition to abortion rights. He recorded a video testimonial for Representative Joe Heck, the Republican candidate in the competitive Senate race in Nevada. He has appeared with at least 17 House members, many in solidly Republican districts where turnout will be crucial; three governors; and four senators — including Richard Burr of North Carolina, who is in a tough re-election fight, and Mike Lee of Utah, who hosted Mr. Pence at a policy forum recently.

“Mike’s excited to continue to unify the party behind the ticket and he looks forward to helping competitive Senate races wherever he can,” said Marc Short, a senior Pence adviser. “He knows it will be important to have a Republican Senate when he and Mr. Trump are elected.”

But Mr. Pence’s firepower in attracting favorable attention, including that of major political donors, is somewhat limited. He lacks the star power of a Sarah Palin or Paul D. Ryan: Though reporters, aides and Secret Service agents were looking on while Mr. Pence got a haircut in Pennsylvania recently, the barber had no idea his customer was a vice-presidential candidate. Another indication: He has appeared on Fox News only about a dozen times since becoming Mr. Trump’s running mate.

As Mr. Pence himself likes to joke, he’s “kind of a B-list Republican celebrity.”

Instead, he has been more active behind the scenes, not only helping Mr. Trump, but also burnishing his own credentials and relationships — something that could help further his own political ambitions if Mr. Trump is defeated.

He has quietly reached out to former Trump rivals, like former Gov. Jeb Bush of Florida and Senator Ted Cruz of Texas, and to fierce opponents, like the Wisconsin radio host Charlie Sykes, to try to quell lingering tensions.

“It’s a very, very soft sell,” said Mr. Sykes, an outspoken critic of Mr. Trump who met privately with Mr. Pence during a recent campaign swing through the state. “He asks nothing. He basically said, ‘Can we keep the lines of communication open?’”

The Trump campaign has also largely ceded donor outreach to Mr. Pence, according to an Indiana Republican briefed on the discussions; Mr. Trump does not enjoy making donor calls, and Mr. Pence’s team has an existing fund-raising apparatus.

On Tuesday, Mr. Pence will headline a fund-raiser in Washington — the first in the capital for the Trump-Pence campaign.

Ryan Williams, a Republican strategist who worked for Mitt Romney’s campaign in 2012, said that while Mr. Pence was “a nice guy” and generally well-liked, some Senate candidates understandably choose to avoid unnecessary risks.

Find out what you need to know about the 2016 presidential race today, and get politics news updates via Facebook, Twitterand the First Draft newsletter.