HOME AGAIN ON THE RANGE 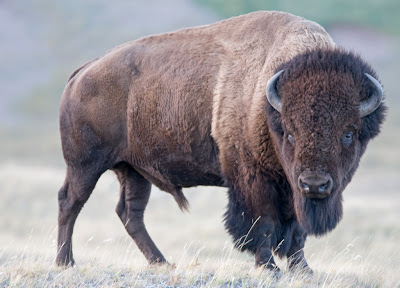 A new report by the International Union for the Conservation of Nature gives some hope that more wild bison may be roaming free on the North American plains. Five hundred years ago, 30 to 50 million bison roamed North America from Mexico to Alaska. But in the 1800s, as European settlers moved across the continent, bison were slaughtered to near-extinction.

Thanks to conservation efforts that started in the 1930s, it is estimated that today there are about 430,000 bison on the continent. Most of these are in commercial herds according to the IUCN report. Only 20,000 Plains Bison and 11,000 Wood Bison are wild, all in carefully managed conservation herds.

While there is no doubt that a growingly conservation-minded public would like more free-ranging bison, the main problem is finding sufficiently large areas of land to accommodate the wandering species. As the herds of wild bison in Yellowstone National Park in the United States grew, they encroached on grazing land for cattle, and in 2008 over 1,000 had to be slaughtered.

In Canada, there’s a proposal to introduce a breeding herd on the eastern slopes of the Rockies between Banff and Jasper National Parks. However, the plan is under review and nobody is expecting this to happen anytime soon. Further south, in Waterton Lakes National Park, the plan for roaming bison was scuttled last year as there is not enough grassland to feed a herd in addition to the resident Elk. The initial breeding stock of Plains Bison, of which the bull photographed here is one, had to be culled so that there was sufficient grass in the adjacent paddock to feed the remainder.

Because of the 10,000-year-old relationship between First Nations and bison, there is a proposal to consult the Blackfoot community to see if undeveloped reserve land could once again become a home for wild bison. Posted by Trevor Page at 14:56 1 comments Labels: Banff, Bison, conservation, grassland, iucn, Jasper, Plains Bison, Wood Bison, Yellowstone