"The object of war is not to die for your country, but to make the other bastard die for his" - General George S. Patton

Patton was such an honorable man. He truly loved his country, his job, and took pride in destroying his enemies for the good of his beloved country and it's citizens. You can call him whatever you want but Patton hands down was one of the best Generals our military ever had. RIP Patton you tough SOB!
"All my life I've wanted to lead men in a desperate battle...and now I'm going to do it." A great leader, who prepared himself from childhood for the time when his country needed him most. "Duty, Honor, Country."

---General Patton was a pure warrior’s warrior, born for the tactical, operational, and strategic fight, and without a hint of trepidation in charging toward the sound of the guns. He was gruff, irascible, and forthright in his assessments of those above and below him. He was also a genius on the battlefield and a thorn in the side of those who fought against him. General James Mattis has a similar streak.--------

1. a guy who knew what war was 2.understood why it was 3. knew how to do it right Patton was not a war lover he didn't start wars

What is George Patton best known for? 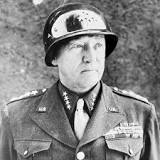 Considered one of the most successful combat generals in U.S history, George Patton was the first officer assigned to the Tank Corps in WWI. During WWII, he helped lead the Allies to victory in the invasion of Sicily, and was instrumental to the liberation of Germany from the Nazis.  died at 60in an Army hospital in Heidelberg ...
4-star general George Patton ws not much concerned about details - logistics were and would remain a mystery to him. He improvised war plans as he went along. Patton achieved four-star rank for his battlefield exploits as one of the best commanders of mechanized forces on either side during the War.
He advocated an aggressive move to complete the encirclement of Nicosia, Sicily, but Eisenhower ordered him to stop, fearing friendly fire between American and British units;
[ 打印 ]
[ 加入书签 ]