This weekend we rented a Mini Cooper Clubman S, the big version of the mini car, to test its practicality as a family car. The idea was to see if I could survive moving a 2-year-old preschooler and a 2-month-old infant in and out of the car daily.

I drove the two kids from the rental lot back, and unloaded them one by one. For those who don't know it already, the Clubman has three doors, one on the driver side, and two on the passenger side. The access to the back seats is from the passenger side. One has to open the front passenger door to get the back (club) door open. The trick is to put the preschooler in the convertible car seat behind the driver first, buckle him up, and then put the infant (already buckled in her infant seat) by the club door behind the passenger. To unload, reverse the procedure. Inconvenience? Yes, but I was so excited about the car that I ignored the trouble. 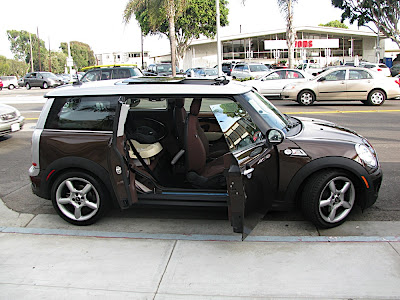 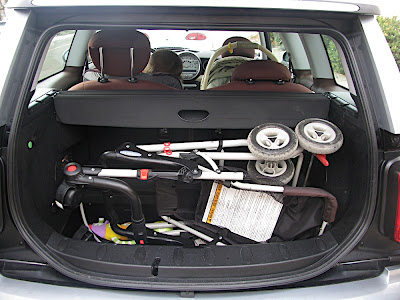 a folded stroller frame in the trunk

The second day the whole family went to a local park in the car. My husband Mike, 6'2", was able to sit comfortably in the roomy passenger seat. The only difficulty was to put the stroller frame for the infant car seat into the trunk. I had to slam the door shut to fit it in. But later we found out that the stroller frame could be folded a little smaller so it would fit easily. We couldn't put much else in the trunk. A diaper bag, jackets, some take-out food, and maybe a toy or two, small ones. Mike worried that our double stroller won't fit, but I was sure we can find a collapsible double stroller that will work, if we were determined to get this car.

In the afternoon we took a drive again. Our neighbor saw us getting into the Clubman and chuckled, "how do you manage to get four people into that car?" "Not my idea," Mike laughed too. We drove off.

We went on the windy road in Parlos Verdes. Mike took a turn driving, and he was using the manual mode of the car. It was such a fun car to drive. And it was so cute too. My son kept saying, "Mini Cooper drive fast!" 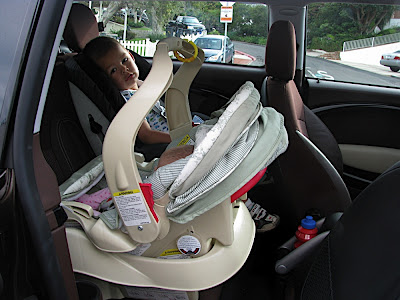 On Monday I put two kids in the car, drop off my son at the preschool, and then drove the baby to her doctor's appointment. At the preschool parking lot, a couple of moms were amazed how I could fit two car seats in the car. One mom told me it was a really cute car. A gardener also discussed the car with me, saying that he had not seen this bigger version of the mini before. I looked around the parking lot. Most were SUVs and minivans, and there was even a Hummer. Mini looked really cute. 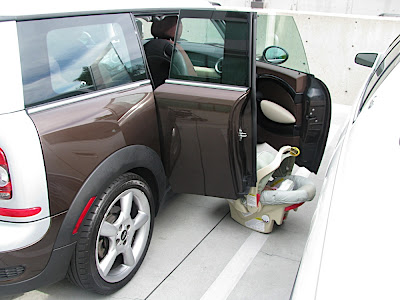 easy to park, but hard to get out

At the doctor's office, there was only one spot left in the parking lot near the door, and it was the only one marked "compact". I was glad that I could squeeze in. But then when I tried to take the infant car seat out, I found it very difficult with the passenger door (and the club door) not able to open fully. Later I realized that even with the doors fully open, the car seat barely fit through.

In the afternoon I took my son to a plaza downtown to play. I was able to load and unload him from the driver side. He could climb on and off his own car seat too. I just had to tuck myself in and buckle and unbuckle him. As he grew older, the task of getting him in and out of the car would only get easier. 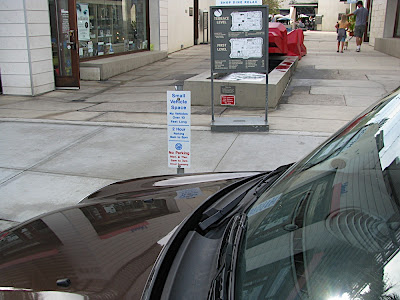 At downtown, I found one parking spot left open, and it was marked, remarkably, "small vehicle space, no vehicles over 10 feet long". I had no problem parking within the markings. When I got home and checked the spec, I found the Clubman at 155 inch long was longer than 10 feet. Even the original Mini Cooper wouldn't qualify. Oh well, maybe that space was meant for a Smart car only.

In the evening we decided to take the car out for one last drive, with the whole family packed in. When we parked outside a store, my son asked to "drive" the car. He sat behind the steering wheel and played with all the funky buttons and dials.

Our garage driveway and the street had a steep angle, and it would scrape the bumper of the mini if we tried to drive the car inside. It will have to be parked outside.

Cons: small cargo space (can be solved by adding a roof rack, and other creative ways of packing), kids loading

The more I load the kids in and out of the car, the more I doubt it. But the more I drive it, the more I love it. As soon as I get everyone situated in the car and start the engine, the fun begins.

What's the verdict? I don't know. Three days is not enough to test drive this car. I need three weeks, three months, or maybe three years. 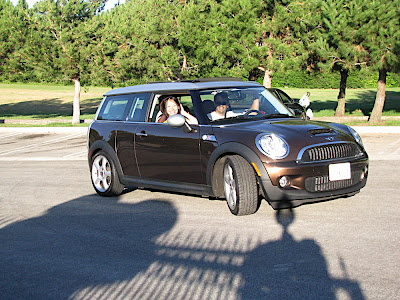 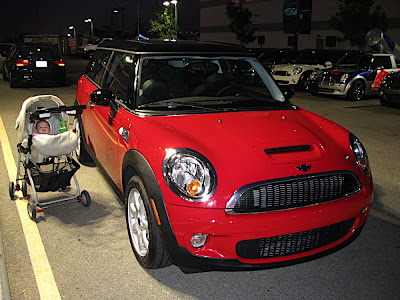 Our brand new car at dealer's lot, ready for us to drive away 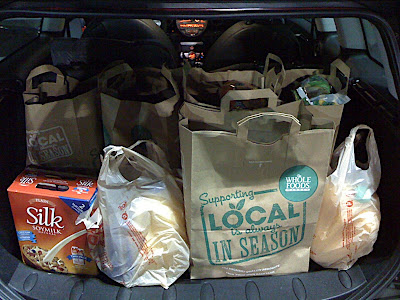 A trunkful of groceries 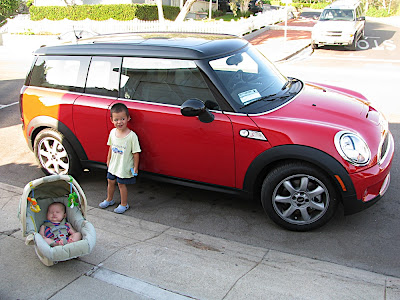